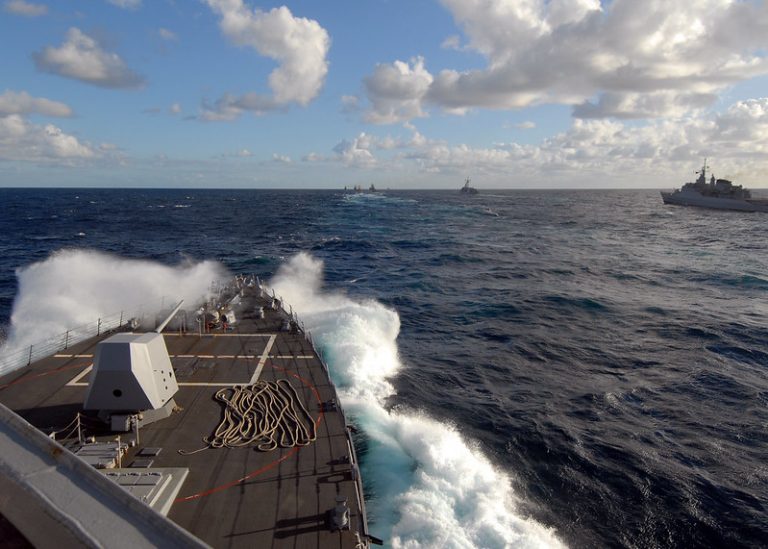 Hacked information can give the Chinese an idea of American military capabilities. (Image: U.S. Navy Via Flickr/ CC0 Public Domain)

Randall Schriver, U.S. assistant secretary of defense for Indo-Pacific security affairs, has raised concerns about China’s motives behind agreeing to the creation of a South China Sea code of conduct. He asked Southeast Asian nations to ensure that Beijing is held legally liable when the agreement is finally reached.

The South China Sea code of conduct is aimed at ending tensions surrounding the South China Sea, a region that has triggered conflicts between China and other southeast nations over international borders and ownership of the numerous islands. Though countries like the Philippines, Vietnam, Malaysia, and Taiwan have raised claims for certain sections of the region, Beijing has opposed them and staked its claim on the entire South China Sea and all of its islands, calling them a “historical” part of China.

Earlier, the UN court had invalidated China’s claim over the South China Sea. However, Beijing swept aside the ruling. Some have asked that the South China Sea be declared a “Global Common.” This would make the region open for everyone, thus ending the conflict between China and Southeast nations. However, such suggestions have also been neglected by the Chinese government. During his recent meeting with Xi Jinping, Philippine President Rodrigo Duterte reminded Beijing about the UN ruling.

“We brought out our position, and they also brought out theirs. And that was it… We cannot expect them to change their comment about the arbitral (award) because even from the start when the arbitration case was filed, they have already said that they don’t honor the ruling. So, that is still the same stand of Xi Jinping,” Delfin Lorenzana, Secretary of National Defense of the Philippines, said in a statement (Japan Times).

Aggression in the South China Sea

To keep peace in the South China Sea region, the U.S. Navy has been conducting several operations. These are largely aimed at disrupting China’s military control over the place. U.S. ships and vessels often sail close to the disputed islands of the South China Sea as a reminder to Beijing that they won’t be able to occupy them using force. Expectedly, this has been irking the Chinese government for so long.

Beijing terms America’s actions as “provocative.” “Freedom of navigation is a concept widely recognized by the international community. However, it should not be used as an excuse to infringe upon the legitimate rights and interests of littoral states,” Shen Jinlong, China’s navy chief, said in a statement (Reuters).

To counter American presence in the South China Sea, Beijing has been using its coast guard and fishing boats to expand its military reach. China’s fishing vessels have been known to fire water cannons against boats from the Philippines and Vietnam. However, U.S. Admiral John Richardson has warned that their Navy ships will take military action against Chinese fishing boats and China’s coast guard if it detects any hostile intention.