Crusaders Tell the History of the Crusades Using DNA 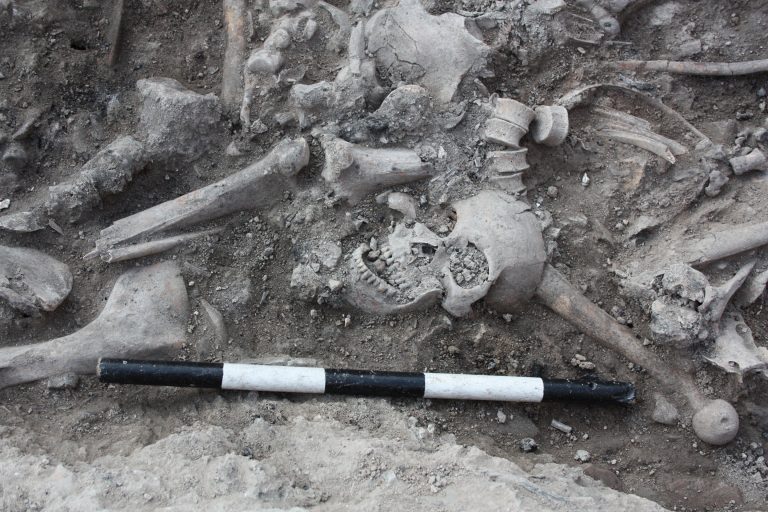 The bones of the Crusaders found in a burial pit in Sidon, Lebanon. (Image: Claude Doumet-Serhal)

History can tell us a lot about the Crusades, the series of religious wars fought between 1095 and 1291, in which Christian invaders tried to claim the Near East. But the DNA of nine 13th century Crusaders buried in a pit in Lebanon shows that there’s more to learn about who the Crusaders were and their interactions with the populations they encountered. The work appears in The American Journal of Human Genetics.

The remains suggest that the soldiers making up the Crusader armies were genetically diverse and intermixed with the local population in the Near East, although they didn’t have a lasting effect on the genetics of Lebanese people living today. They also highlight the important role ancient DNA can play in helping us understand historical events that are less well documented.

“We know that Richard the Lionheart went to fight in the Crusades, but we don’t know much about the ordinary soldiers who lived and died there, and these ancient samples give us insights into that.”

“Our findings give us an unprecedented view of the ancestry of the people who fought in the Crusader army. And it wasn’t just Europeans.

“We see this exceptional genetic diversity in the Near East during medieval times, with Europeans, Near Easterners, and mixed individuals fighting in the Crusades and living and dying side by side.”

Archaeological evidence suggested that 25 individuals whose remains were found in a burial pit near a Crusader castle near Sidon, Lebanon, were warriors who died in battle in the 1200s. Based on that, Tyler-Smith, Haber, and their colleagues conducted genetic analyses of the remains and were able to sequence the DNA of nine Crusaders, revealing that three were Europeans, four were Near Easterners, and two individuals had mixed genetic ancestry.

Throughout history, other massive human migrations — like the movement of the Mongols through Asia under Genghis Khan and the arrival of colonial Iberians in South America — have fundamentally reshaped the genetic makeup of those regions. But the authors theorize that the Crusaders’ influence was likely shorter-lived because the Crusaders’ genetic traces are insignificant in people living in Lebanon today. Tyler-Smith said:

“They made big efforts to expel them, and succeeded after a couple of hundred years.”

This ancient DNA can tell us things about history that modern DNA can’t. In fact, when the researchers sequenced the DNA of people living in Lebanon 2,000 years ago during the Roman period, they found that today’s Lebanese population is actually more genetically similar to the Roman Lebanese. Haber explained:

“You would think that nothing happened between the Roman period and today, and you would miss that for a certain period of time the population of Lebanon included Europeans and people with mixed ancestry.”

The bones of the Crusaders found in a burial pit in Sidon, Lebanon. (Image: Claude Doumet-Serhal)

These findings indicate that there may be other major events in human history that don’t show up in the DNA of people living today. And if those events aren’t as well-documented as the Crusades, we simply might not know about them. Tyler-Smith added:

“Our findings suggest that it’s worthwhile looking at ancient DNA even from periods when it seems like not that much was going on genetically. Our history may be full of these transient pulses of genetic mixing that disappear without a trace.”

That the researchers were able to sequence and interpret the nine Crusaders’ DNA at all was also surprising. DNA degrades faster in warm climates, and the remains studied here were burned and crudely buried. Haber added:

“There has been a lot of long-term interest in the genetics of this region, because it has this very strategic position, a lot of history, and a lot of migrations. But previous research has focused mainly on present-day populations, partly because recovering ancient DNA from warm climates is so difficult.

“Our success shows that studying samples in a similar condition is now possible because of advances in DNA extraction and sequencing technology.”

Next, the researchers plan to investigate what was happening genetically in the Near East during the transition from the Bronze Age to the Iron Age.

But they also hope that these kinds of studies will become more commonplace — and more interdisciplinary. Tyler-Smith said:

“But genetics gives us a complementary approach that can confirm some of the things that we read about in history and tell us about things that are not recorded in the historical records that we have.

“And as this approach is adopted by historians and archaeologists as a part of their field, I think it will only become more and more enriching.”