Human Settlements in Amazonia Much Older Than Previously Thought 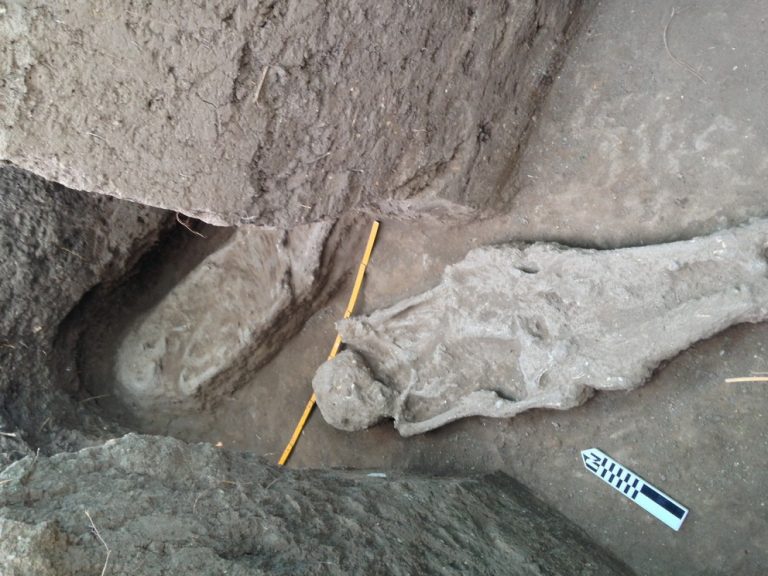 The team's excavations of the forest islands revealed human skeletons that had been intentionally buried in a manner unlike that of typical hunter gatherers and instead were more akin to the behaviors of complex societies — characterized by political hierarchy and the production of food. (Image: Jose Capriles)

Humans settled in southwestern Amazonia and even experimented with agriculture much earlier than previously thought, according to an international team of researchers. Jose Capriles, assistant professor of anthropology, said:

“We have long been aware that complex societies emerged in Llanos de Moxos in southwestern Amazonia, Bolivia, around 2,500 years ago, but our new evidence suggests that humans first settled in the region up to 10,000 years ago during the early Holocene period.

“These groups of people were hunter gatherers; however, our data show that they were beginning to deplete their local resources and establish territorial behaviors, perhaps driving them to begin domesticating plants such as sweet potatoes, cassava, peanuts, and chili peppers as a way to acquire food.”

“These islands are elevated above the surrounding savanna, so they do not flood during the rainy season.

“We believe people were using these sites recurrently as seasonal camps, particularly during the long rainy seasons when most of the Llanos de Moxos become flooded.”

The team’s excavations of the forest islands revealed human skeletons that had been intentionally buried in a manner unlike that of typical hunter-gatherers and instead were more akin to the behaviors of complex societies — characterized by political hierarchy and the production of food. Their results appear  in Science Advances. Capriles said:

“If these were highly mobile hunter-gatherers, you would not expect for them to bury their dead in specific places; instead, they would leave their dead wherever they died.”

Capriles noted that it is rare to find human or even archaeological remains that predate the use of fired pottery in the region, adding:

“The soils tend to be very acidic, which often makes the preservation of organic remains very poor.

“Also, organic matter deteriorates quickly in tropical environments and this region completely lacks any type of rock for making stone tools, so even those are not available to study.”

According to Umberto Lombardo, an earth scientist at the University of Bern, when the researchers first published their discovery of these archaeological sites in 2013, they had to base their conclusions on indirect evidence — mostly geochemical analyses — rather than direct evidence such as artifacts. He explained:

“Because of the lack of direct evidence many archaeologists were skeptical about our findings.

“They did not really believe that those forest islands were early Holocene archaeological sites. The current study provides strong and definitive evidence of the anthropocentric origin of these sites, because the archaeological excavations uncovered early Holocene human burials. These are the definitive proof of the antiquity and origin of these sites.”

Capriles noted that the human bones on these forest islands were preserved despite the poor conditions because they were encased within middens — or trash heaps — containing abundant fragments of shell, animal bones, and other organic remains. Capriles said:

“These people were foraging apple snails during the wet season and disposing of the shells in large heaps, called middens.

“Over time, water dissolved the calcium carbonate from the shells and those carbonates precipitated over the bones, effectively fossilizing them.”

Because the human bones were fossilized, the team was unable to date them directly using radiocarbon dating. Instead, they used radiocarbon dating of associated charcoal and shell as a proxy for estimating the time range that the sites were occupied.

“The abundant remains of burned earth and wood suggests that the people were using fire, likely to clear land, cook food, and keep warm during long rainy days.”

According to Capriles, a gap exists between the people his team studied who lived on the forest islands between 10,000 and 4,000 years ago and the rise of complex societies, which began around 2,500 years ago. Lombardo said:

“This paper represents the first step in the effort to learn more about the people who inhabited southwestern Amazonia for thousands of years but we know nothing about.”

“Are the people we found direct predecessors of those later, more complex societies? There are still questions to be answered and we hope to do so in future research.”