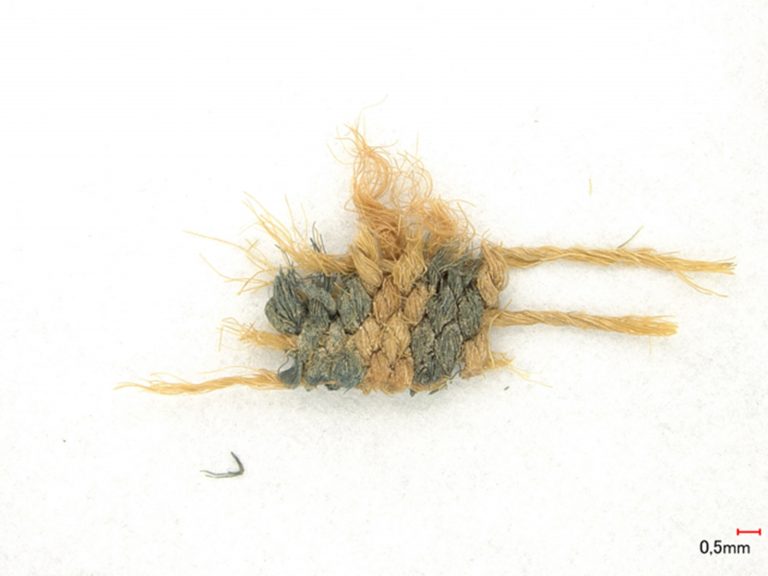 Samples like these were examined by the chemists from MLU. (Image: Annemarie Kramell)

Even thousands of years ago people wore clothing with colorful patterns made from plant- and animal-based dyes. Chemists from Martin Luther University Halle-Wittenberg (MLU) have created new analytical methods to examine textiles from China and Peru that are several thousand years old. In the scientific journal Scientific Reports, they describe their new method, which is able to reconstruct the spatial distribution of dyes, and hence the patterns, in textile samples.
Chemists Dr. Annemarie Kramell and Professor René Csuk from MLU examined two ancient textile samples. One comes from the ancient Chinese city of Niya and was probably once part of a shirt. It is over 2,000 years old. The other sample comes from Peru and dates back to AD 1100 to AD 1400. It was produced by the Ichma people who lived in Peru at that time.
Today, there is often little evidence of the colorfulness of such ancient clothing. Over time, the natural dyes have decomposed as a result of the effects of light, air, and water explains the chemist. In the past, only natural dyes were used. René Csuk said:

“Time has not treated them well. What was once colorful is now mostly dirty, grey, and brown.”

“The roots of a genus of plants called Rubia, for example, were used to create the red colors, and ground walnut shells produced the brown tones.”

The researchers have developed a new analytical method that allows them to detect which materials were used for which colors. With the aid of modern imaging mass spectrometry, they have succeeded in depicting the dye compositions of historical textile samples as isotopic distributions. Previously, the dyes had to be removed from the textiles.
However, that previous method also destroyed the pattern. This new approach enables the chemists from MLU to analyze the dyes directly from the surface of the textile samples. To do this, the piece of material under investigation is first embedded in another material. Csuk explained:

“The piece is placed in a matrix made up of a material called Technovit7100. Slices are produced from this material that are only a few micrometers thick. These are then transferred to special slides.”

Similar methods are used, for example, in medical research to examine human tissue. The advantage is that this method can be used to study very complex samples on a micrometer scale. Csuk said:

“This enables us to distinguish between two interwoven threads that held originally different colors.”

As part of the new study, researchers were able to detect indigo dyes in the samples. However, the method can also be applied to many other dye classes and provides insights into the process of textile production in past cultures, the two scientists conclude.

Provided by: Martin-Luther-Universität Halle-Wittenberg [Note: Materials may be edited for content and length.]