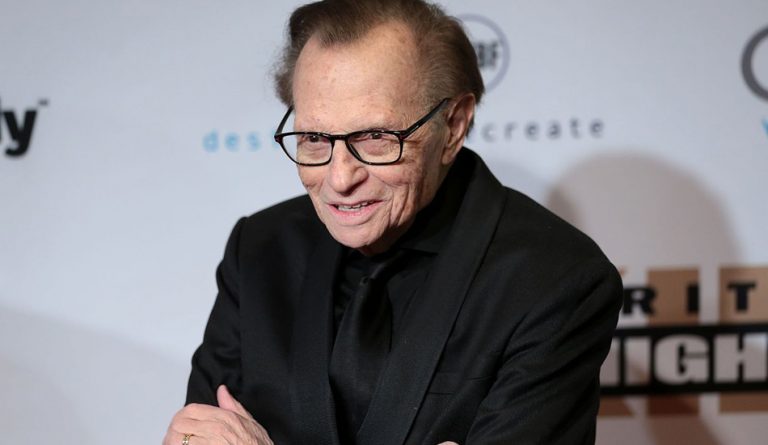 Larry King is one of the most famous television hosts in the U.S. (Image: Gage Skidmore via flickr CC BY-SA 2.0)

Recently, it was rumored that popular television host Larry King was hospitalized due to a heart attack and cardiac arrest. However, his publicists have denied the rumors and said that the 85-year-old was hospitalized for a different reason. King had already scheduled an angioplasty procedure that was aimed at easing blood flow through the artery. However, he admitted himself to the hospital before the scheduled date due to chest pains. The procedure is apparently complete and King is regaining his health.

“On the morning of Thursday, April 23, Larry King was scheduled for an angioplasty. Before his scheduled procedure, he experienced angina and went to the hospital early to be examined. His doctor successfully performed the angioplasty and inserted stents to reopen the previous bypass from 1987. He has been recuperating in the hospital and is scheduled to be released soon. His doctors expect him to make a full recovery,” King’s official Twitter account said in a tweet.

Before being subjected to bypass surgery in 1987, King used to smoke around three packs of cigarettes. Currently, King lives with two health issues — Type 2 diabetes and prostate cancer. In 2017, King was battling lung cancer as doctors noticed a tumor during an annual checkup. This was later removed through surgery.

“It wasn’t really a battle…  I have a checkup every year. I’ve gone through a lot in my life — I’ve had a heart attack and heart surgery. Part of my checkup is the chest X-ray, and that is the protocol. I do it every year … it was always normal. Then the doctor says: ‘I see a little spot here,'” he said in a statement (USA Today).

Larry is said to be in high spirits and is expected to be back soon for his shows PoliticKING with Larry King and Larry King Now. Both shows reportedly attract millions of viewers across the world. His show PoliticKING with Larry King was mired in controversy initially since it was broadcasted on RT America, a channel that is described as pro-Russian. However, King announced that the channel only has a license to distribute the content he creates and that he would end the deal in case RT America tried to alter the show somehow.

Born in 1933 in Brooklyn, Larry has conducted over 30,000 interviews, including U.S. presidents from Gerald Ford to Barack Obama. Originally born as Larry Zeiger, the boss of his first show thought that the name Zeiger was too ethnic. Eventually, his employer gave him the last name of King after seeing a paper ad for “King’s Wholesale Liquors.”

What made Larry stand out from other television hosts is the fact that he made only minimal preparations for his shows. On most occasions, he knew little to nothing about the people he was interviewing or their background. While this gave a unique flavor to his talk shows, it also created a few uncomfortable scenes. For instance, Larry once asked a Catholic priest whether he had any children and how old they were.

Larry has also been involved in charitable causes. In 2017, it was announced that he would be donating $1 million to Bradley University’s Sports Communications program. The donation was aimed at funding scholarships for underrepresented students. He has been married eight times to seven women and has five children.