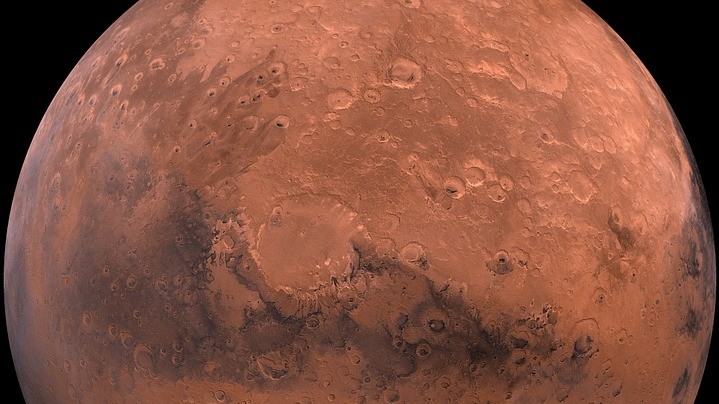 The planet has lost much of its former amounts of water and even today, hydrogen continues to escape into space. (Image: via pixabay / CC0 1.0)

Approximately every two Earth years, when it is summer on the southern hemisphere of Mars, a window opens: Only there and only in this season can water vapor efficiently rise from the lower into the upper atmosphere.

There, winds carry the rare gas to the North Pole. While part of the water vapor decays and escapes into space, the rest sinks back down near the poles.

Researchers from the Moscow Institute of Physics and Technology and the Max Planck Institute for Solar System Research (MPS) in Germany describe this unusual Martian water cycle in a current issue of the Geophysical Research Letters.

Their computer simulations show how water vapor overcomes the barrier of cold air in the middle atmosphere of Mars and reaches higher air layers.

This could help to understand why Mars — unlike Earth — has lost most of its water. Billions of years ago, Mars was a planet rich in water, with rivers and even an ocean. Since then, our neighboring planet has changed dramatically.

Today, only small amounts of frozen water exist in the ground; in the atmosphere, water vapor occurs only in traces. All in all, the planet may have lost at least 80 percent of its original water.

In the upper atmosphere of Mars, ultraviolet radiation from the Sun split water molecules into hydrogen (H) and hydroxyl radicals (OH). The hydrogen escaped from there irretrievably into space.

Measurements by space probes and space telescopes show that even today water is still lost in this way. But how is this possible? The middle atmosphere layer of Mars, like Earth’s tropopause, should actually stop the rising gas.

After all, this region is usually so cold that water vapor would turn to ice. How does the Martian water vapor reach the upper air layers? In their current simulations, the Russian and German researchers find a previously unknown mechanism reminiscent of a kind of pump.

Their model comprehensively describes the flows in the entire gas envelope surrounding Mars: from the surface to an altitude of 160 kilometers.

The calculations show that the normally ice-cold middle atmosphere becomes permeable to water vapor twice a day — but only at a certain location and at a certain time of year. The orbit of Mars plays a decisive role in this: Its path around the Sun, which lasts about two Earth years, is much more elliptical than that of our planet.

At the point closest to the Sun (which roughly coincides with the summer of the southern hemisphere), Mars is approximately 42 million kilometers closer to the Sun than at its furthest point.

“When it is summer in the southern hemisphere, at certain times of day, water vapor can rise locally with warmer air masses and reach the upper atmosphere.”

In the upper atmospheric layers, air flows carry the gas along the longitudes to the North Pole, where it cools and sinks down again. However, part of the water vapor escapes this cycle: Under the influence of solar radiation, the water molecules disintegrate and hydrogen escapes into space.

Another Martian peculiarity can fortify this unusual hydrological cycle: huge dust storms that span the entire planet and repeatedly afflict Mars at intervals of several years.

The last such storms occurred in 2018 and 2007 and were comprehensively documented by space probes orbiting Mars. Alexander Medvedev from MPS said:

“The amounts of dust swirling through the atmosphere during such a storm facilitate the transport of water vapor into high air layers.”

The researchers calculated that during the dust storm of 2007, twice as much water vapor reached the upper atmosphere as during a stormless summer in the southern hemisphere.

Since the dust particles absorb sunlight and thus heat up, the temperatures in the entire atmosphere rise by up to 30 degrees. Dmitry Shaposhnikov of the Moscow Institute of Physics and Technology, first author of the new study, explained:

“Our model shows with unprecedented accuracy how dust in the atmosphere affects the microphysical processes involved in the transformation of ice into water vapor.”

“Apparently, the Martian atmosphere is more permeable to water vapor than that of the Earth.

“The new seasonal water cycle that has been found contributes massively to Mars’ continuing loss of water.”