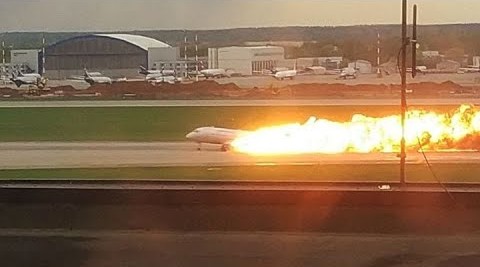 When a Sukhoi Superjet-100 belonging to the Russian airline Aeroflot made an emergency landing at the Moscow Sheremetyevo airport recently, it caught fire. (Image: Screenshot / YouTube)

When a Sukhoi Superjet-100 belonging to the Russian airline Aeroflot made an emergency landing at the Moscow Sheremetyevo airport recently, it caught fire. There were 78 people on board when the tragedy took place, including five crew members. Though it was earlier believed that only 13 people were killed in the incident, latest reports put the number at 41. As such, only 37 people have been confirmed to have survived.

The plane was headed to Murmansk when it took off. However, 30 minutes after it took flight, the aircraft came back to crash land at the airport. Television footage from the airport shows the plane bouncing multiple times on the ground before its rear section burst into flames. As soon as the plane stopped, several passengers exited through the emergency slides. No official cause has been ascribed to the accident. However, some of the surviving passengers claim that the plane was hit by a lightning strike.

“We took off and then lightning struck the plane… The plane turned back and there was a hard landing. We were so scared we almost lost consciousness. The plane jumped down the landing strip like a grasshopper and then caught fire on the ground,” one of the surviving passengers said in a statement (Euro News).

There have been rumors that the Investigative Committee is checking into whether the pilots of the craft had broken any air safety rules that led to the accident. Some of the factors pointing to this conclusion include the pilots’ decision to fly the craft into a storm front, landing in emergency control mode rather than relying on automatic systems, and landing at too high a speed. The black box has been recovered and will be examined and the results will be announced in a few weeks.

“Investigators soon will begin interviewing victims, eyewitnesses, airport staff, and the airline carrier, as well as other persons responsible for the operation of the aircraft,” Svetlana Petrenko, Investigative Committee spokeswoman, said in a statement (CBS News).

The Russian transport ministry has denied the possibility of grounding the Superjet-100, arguing that there is no fault in its design. However, aviation experts are suspicious of the craft since communication was essentially cut off between the plane and the tower. This is something that should not normally happen since modern aircraft are designed to get through storms.

Problem with the aircraft?

The Sukhoi Superjet-100 is the first domestically made passenger craft to be used in Russian airlines since the fall of the Soviet Union. The aircraft entered service in 2011. Though it has been positioned as a symbol of Russia’s technological self-sufficiency, the model has been plagued by a series of problems over the past few years.

In 2012, a Superjet-100 crashed into the Indonesian mountainside, killing 37 people in the process. The accident was blamed on pilot error. However, the crash of a plane that just entered service a year earlier ended up deflating the confidence of buyers and many airline companies chose not to purchase any. In December 2016, a grounding defect was found in one of the plane’s tail sections. In October last year, a Superjet-100 rolled off the runway in Russia’s Sakha Republic. The plane was eventually decommissioned.

Early this year, Ireland’s CityJet announced that it would be returning all seven Superjet-100s to the leasing company. CityJet was the only European airline that had bought the Russian aircraft. Last month, Slovenia canceled a possible contract for the purchase of 15 Superjets. Sukhoi had planned to sell 800 Superjets by 2024. However, this now seems impossible given the safety concerns surrounding the aircraft.