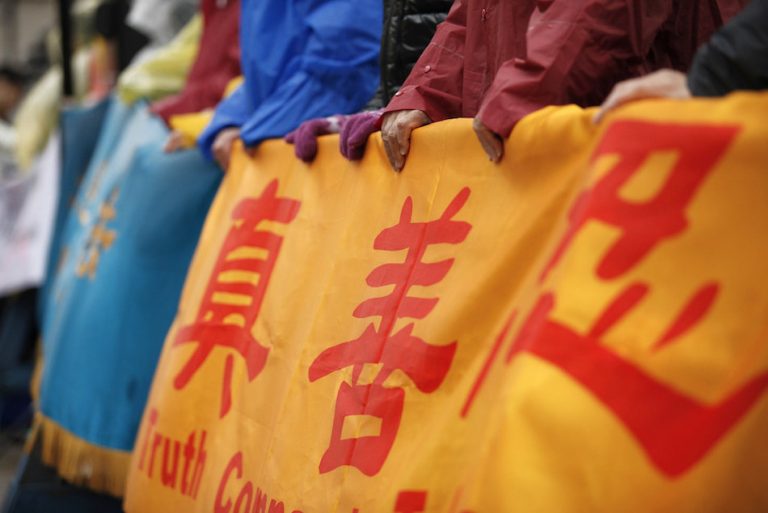 A Falun Gong banner with the Chinese characters for Truthfulness, Compassion, Tolerance, which are the practice’s three core principles. (Image: Jbroadcast via flickr / CC BY 2.0)

Falun Gong has reportedly been spreading in the North Korean capital, but Kim Jong Un’s regime has been cracking down on the spiritual practice that originated from neighboring China.

Sources told RFA that authorities in Pyongyang have begun a clampdown on the practice, which has been spreading in the city after it was introduced by Chinese trade workers.

The spread of Falun Gong among the city’s citizens surged beyond the expectations of the authorities, a source told RFA on May 11.

The state’s crackdown targeting Falun Gong appears to have boomeranged on the authorities, with the attention attracting even more people to the Buddha-school practice.

“Falun Gong is known here as a religious practice that combines meditation and physical exercises, so people are now approaching it with curiosity,” the source said.

The source went on to say that the practice is spreading among high-ranking North Korean government officials and their families.

Falun Gong, also known as Falun Dafa, is a spiritual discipline based on meditation and slow-moving exercises, with practitioners following three main principles: Truthfulness, Compassion, Tolerance. It began in northern China during the early 1990s. Easy and free to learn, it quickly spread through China and beyond its borders.

RFA’s source said that the authorities began their crackdown on Falun Gong in April and police decreed that Falun Gong practitioners needed to report to them.

“They threatened to impose harsh punishments on those who don’t turn themselves in, but are found after the reporting period,” the source said.

The source said that some 100 Falun Gong practitioners have been arrested and they will be imprisoned.

In practice, the North Korean regime does not tolerate its population having spiritual beliefs, making the crackdown no surprise.

A second source likened the situation to how the North Korean state has persecuted other religious believers in the past.

“The Central Committee [of the Korean Workers’ Party] say that Christianity is like opium or drugs and have harshly punished [Christians]. Now that Falun Gong is here, people are watching closely to see how the authorities will respond,” the second source said.

This source said that he thinks Falun Gong will not be easy for the North Korean authorities to suppress.

“Even the Chinese government did not win [their battle] against Falun Gong, and now it’s spreading in Pyongyang, the heart of a historic hereditary dictatorship,” the second source said.

In 2017, a Freedom House report said that the Chinese state’s persecution of Falun Gong had failed, and millions of Mainland Chinese still adhere to the meditation practice.

While Falun Gong practitioners in China remain under severe persecution and remain at risk of arbitrary detention, torture, organ harvesting, and extrajudicial execution, the report said there has been evidence that there has been a decrease in the trajectory of the persecution.

The communist state in China began the persecution of Falun Gong in 1999. Watch this video from Swoop Films for more: