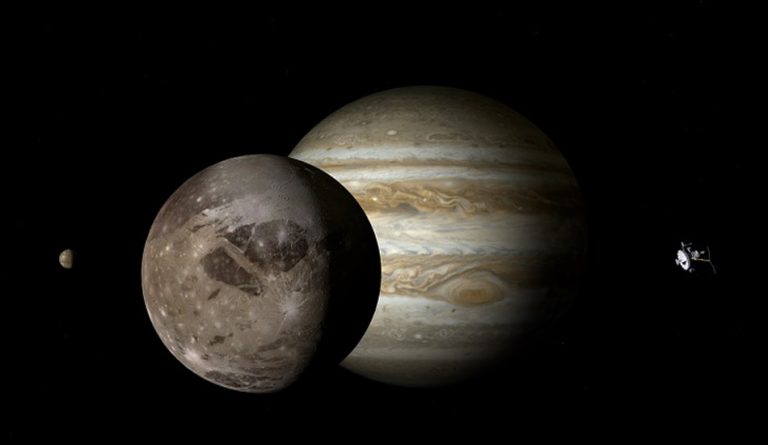 Ganymede, a moon of Jupiter, is the biggest moon in the solar system. (Image: pixabay / CC0 1.0)

Studying Titan’s surface is usually a difficult task since the moon is covered with several layers of haze. As such, things like ice and water can be difficult to spot. The researchers detected the ice corridor using a method called Principal Components Analysis (PCA), which allowed them to process multiple pixels of Cassini’s imagery. This allowed specific elements on the surface of Titan to become identifiable. Researchers believe the ice corridor to have formed as a result of extreme volcanic activity in the past. At present, Titan does not have any active ice volcanoes. But sometime in the past, an ancient cryovolcano may possibly have erupted, pushing out water and methane into Titan’s environment.

“This icy corridor is puzzling because it doesn’t correlate with any surface features nor measurements of the subsurface… Given that our study and past work indicate that Titan is currently not volcanically active, the trace of the corridor is likely a vestige of the past… We detect this feature on steep slopes, but not on all slopes. This suggests that the icy corridor is currently eroding, potentially unveiling presence of ice and organic strata,” Caitlin Griffith, a University of Arizona researcher who co-authored the study, said to the Daily Mail.

Moving forward, the team plans on exploring Titan’s poles, which are known to be rich in methane. Though Titan and Earth have different evolutionary histories, both ended up with an atmosphere and surface rich with organic elements. Titan is 50 percent bigger than Earth and is believed to be an ideal place to live in case human beings need to leave the planet in search of new settlements.

The Cassini mission was a joint venture between NASA, the European Space Agency, and the Italian Space Agency. The mission was launched in 1997 and ended in 2017 when Cassini went into Saturn’s upper atmosphere and burned up. This was done to avoid contaminating moons like Titan, which would have offered a habitable world for the earthly microbes on the spacecraft.

Titan is the second-largest moon in our solar system after Jupiter’s Ganymede. Identified by Dutch physicist Christiaan Huygens in 1655, it was the sixth moon to be discovered in the solar system. It is the only moon we know of that has a substantial atmosphere. The primary component of Titan’s atmosphere is nitrogen. Elements like hydrogen, ethane, carbon dioxide, etc. make up the rest.

Interestingly, Titan’s surface is believed to change shape over time. This discovery was made when Cassini’s fly-ins showed that the surface rose and fell by as much as 10 meters in a single orbit. This would mean that the moon undergoes large changes in its shape when it orbits Saturn. Scientists believe that this happens because Titan’s thin crust lies over an ocean that may or may not be water.

Though there are several mountains on Titan, they are usually not that high, possibly due to the thin crust. Most of the mountains on Titan are named after the peaks from Middle Earth, a fictional land in Tolkien’s fantasy novels.