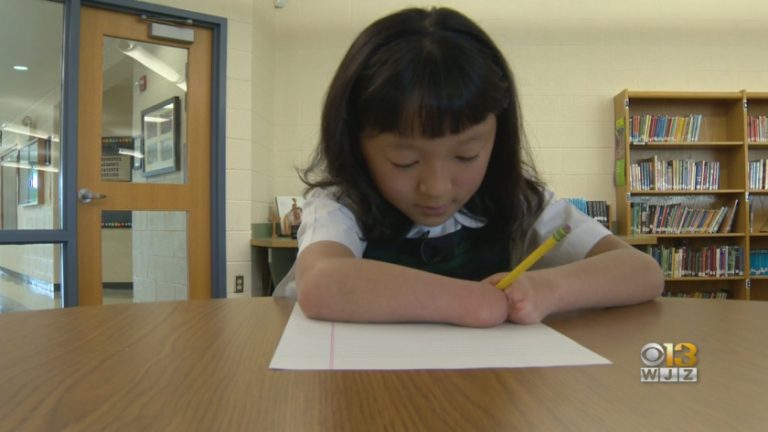 Sara won the handwriting competition even though she does not have hands. (Image: CBS Baltimore)

At the 2019 Zaner-Bloser National Handwriting Contest, the Nicholas Maxim Award for best handwriting was won by a 10-year old girl, Sara Hinesley, from Maryland. What makes her achievement so inspiring is that she was born without hands.

Sara was born in China and was adopted about four years ago by an American family. When she arrived in the U.S., Sara could only speak and write Mandarin. However, her new sister taught her the basics of English. Her mother, Cathryn Hinesley, knew early on that Sara was not someone who would shut herself in a corner just because of her disability.

“She has this independent streak where she just knows that she can do it and she’ll figure out her own way… She is beautiful and strong and mighty just the way she is, and she just lives that way. She really does… We learned pretty quickly to trust her judgment and let her gauge how much she wants to do and then let her do it… That’s Sara. She moves through life in this way that you never really see her as having a disability because she has this can-do, I-can-tackle-anything attitude,” she said to the South China Morning Post.

Though she has been offered a prosthetic, Sara has rejected it. Even when offered with some tools that might make her tasks easier, Sara chooses to do things the hard way. She writes by gripping the pencil between her two arms and focuses on the shape of the letters, their curves, and points. Sara compares cursive writing to creating artwork. When free, Sara likes to draw things around her, like sunflowers. Her other hobbies include playing chess and swimming.

“The things I can’t do, I try to figure out the ways I can do it… and try my best to make it work… I just try my hardest and put my mind to it and this is what happens,” she said to CBS Baltimore. Sara will receive her award on June 13, consisting of a trophy and US$500. She is the first student from her school to win the Nicholas Maxim Award. With her win, Sara is now an inspirational figure in school.

In India, a boy born without hands is evoking feelings of awe in the media. Sixteen-year-old Bikram Bhattarai from the state of Sikkim writes with his feet. And in the recent 10th-grade exams, he came out with flying colors, scoring an impressive 72 percent. Even for activities like brushing, eating, bathing, painting, using a mobile, and so on, Bikram uses his feet.

“He was always a bright child who never lost confidence because of his physical challenges. People in the village taunted us for giving birth to a child without hands saying it’s a bad omen and would bring bad luck to our family, but the same people now don’t stop appreciating Bikram’s skills,” his father said to News18.

Bikram is happy with his scores and wants to be an electrical engineer. For his 11th grade, he has opted for science stream. He is thankful that his parents stood by his side all through his life and wants to make them proud one day. In 2010, Bikram was given the National Child Achievement Award by the Ministry of Women and Child Welfare.