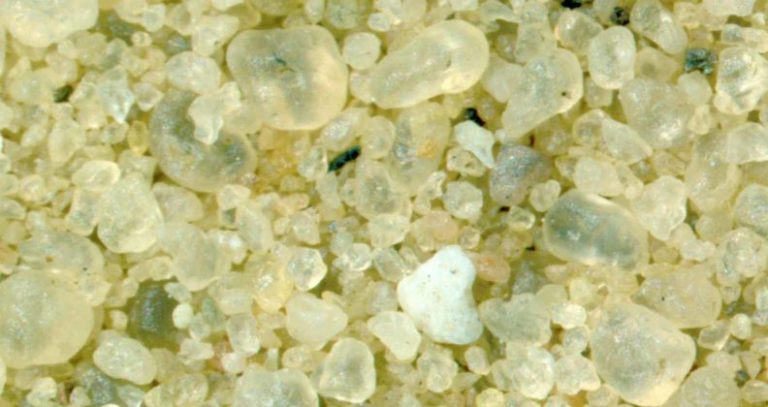 A researcher has solved a nearly 100-year-old riddle by discovering that glass found in the Egyptian desert was created by a meteorite impact, rather than atmospheric airburst. (Image: Curtin University)

A Curtin University researcher has solved a nearly 100-year-old riddle by discovering that Egyptian desert glass was created by a meteorite impact, rather than atmospheric airburst, in findings that have implications for understanding the threat posed by asteroids.

Published in the leading journal Geology, the research examined tiny grains of the mineral zircon in samples of Egyptian desert glass that formed 29 million years ago and is found over several thousand square kilometers in western Egypt. Nearly pure silica, the canary yellow glass was famously used to make a scarab that is part of King Tut’s Pectoral.

Lead author Dr. Aaron Cavosie, from the Space Science and Technology Centre in Curtin’s School of Earth and Planetary Sciences, said zircons in the glass preserved evidence of the former presence of a high-pressure mineral named reidite, which only forms during a meteorite impact. Dr. Cavosie said:

“It has been a topic of ongoing debate as to whether the glass formed during meteorite impact, or during an airburst, which happens when asteroids called Near Earth Objects explode and deposit energy in the Earth’s atmosphere.

Dr. Cavosie said the idea that the glass may have formed during a large atmospheric airburst gained popularity after a dramatic airburst over Russia in 2013, which caused extensive property damage and injury to humans, but did not cause surface materials to melt, adding:

“Previous models suggested that Libyan desert glass represented a large, 100-Mt class airburst, but our results show this is not the case.

“Meteorite impacts are catastrophic events, but they are not common. Airbursts happen more frequently, but we now know not to expect a Libyan desert glass-forming event in the near future, which is cause for some comfort.”