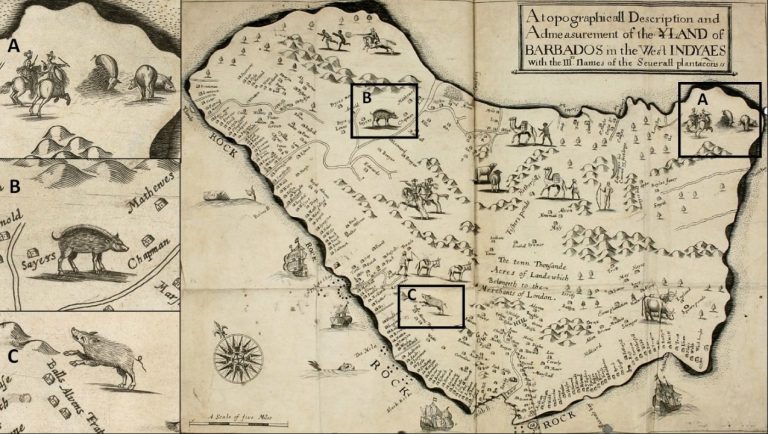 Which came first, the pigs or the pioneers? In Barbados, that has been a historical mystery ever since the first English colonists arrived on the island in 1627 to encounter what they thought was a herd of wild European pigs.

A recent discovery by an SFU archaeologist is shedding new light on the matter. Christina Giovas uncovered the jaw bone of a peccary, a South American mammal that resembles a wild pig, while researching a larger project on prehistoric animal introductions in the Caribbean. Giovas, the lead author of the study published in PLOS ONE, said:

“I didn’t give it much notice at the time, but simply collected it along with other bones.

“It was completely unexpected and I honestly thought I must have made a mistake with the species identification.”

Giovas and collaborators George Kamenov and John Krigbaum of the University of Florida radiocarbon-dated the bone and conducted strontium isotope analysis to determine the age and whether the peccary was born on Barbados or had been imported from elsewhere.

The results showed the peccary was local and dated to 1645-1670, when the English wrote their account of finding wild European pigs on the Caribbean island. The researchers were not only able to show there had been a previously undetected historic peccary introduction, but that the region’s earliest celebrated maps depicted peccaries that had been mistaken for pigs by the English.

“Checking historical and archaeological records, we determined the most likely source of peccary introduction was from Spanish or Portuguese ships passing the island in the 16th century — and most likely left as a source of meat for future visiting sailors.”

Provided by: Simon Fraser University [Note: Materials may be edited for content and length.]