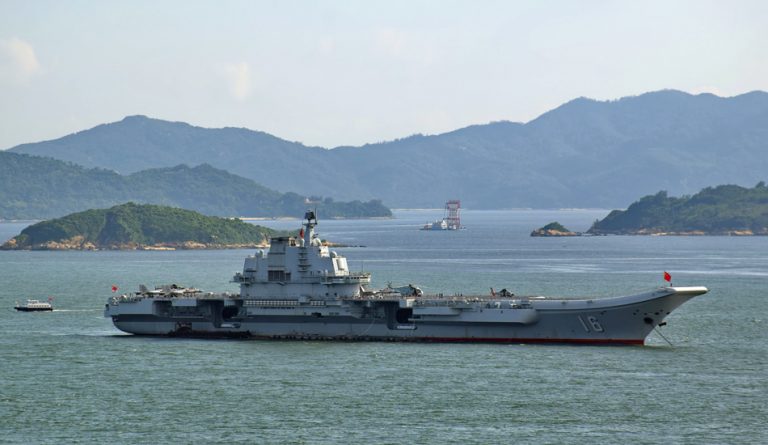 New satellite images of the Jiangnan shipyard in Shanghai have revealed that China may be constructing its third aircraft carrier. If true, this might well be the first full-sized carrier of the Chinese military and is expected to weigh around 85,000 tons once completed. The images were taken by ChinaPower, a unit of the Center for Strategic and International Studies.

“Visible through the clouds and mist is what looks to be a bow and main hull section of a large vessel… While details regarding the Type 002 are limited, what is observable at Jiangnan is consistent with what is expected for the People’s Liberation Army Navy’s third aircraft carrier,” ChinaPower said in a statement (The Guardian).

To accommodate the new huge carrier, the shipyard looks to be constructing a floodable ship basin, new tower crane, and a launching channel. The carrier is expected to be completed by 2022. The Pentagon had previously noted that the Chinese may have started work on the new carrier, but did not present any images. China is remaining silent on the issue.

Beijing’s drive to build an indigenous aircraft carrier is driven on two factors. One is that this would advance the country’s military production infrastructure. The second is that China would be able to eventually develop newer technologies that can give it an edge over others in the future.

“Once completed, it will outclass any warship from any Asian country, including India and Japan… It is yet another indication that China has emerged as Asia’s paramount naval power,” Ian Storey, a security analyst from Singapore, said in a statement (Reuters). It is not clear whether the carrier will be powered by nuclear energy.

China’s existing two carriers are small, capable of carrying just about 25 aircraft. While the first one was bought secondhand from Ukraine, the second carrier was manufactured locally, based on the designs of the first ship. The second carrier is currently undergoing sea trials and will be inducted sometime in 2020.

Chinese President Xi Jinping has asked the PLA to modernize by 2035 and become a top fighting force by 2050. At present, the U.S. operates 11 aircraft carriers. Against this, China’s existing two aircraft carriers and the third one in construction do not look threatening. However, Beijing has a long-term plan to have at least six carriers by 2035, four of which will always be battle-ready to take on new challenges. This would allow China to be a serious threat in the South China Sea, and may even force the U.S. to stop patrolling the region to avoid potential conflicts.

“China’s nuclear-powered aircraft carriers with [EMALS-like systems] are expected to join the navy by 2035, bringing the total number of carriers to at least six — although only four will work at the front line… The country needs to keep developing until it is at the same level as the United States,” Wang Yunfei, a naval expert and retired PLA destroyer naval officer, said to the South China Morning Post.

Even if China goes through an economic slowdown, Wang does not see it affecting the budget set aside for modernizing the navy. During a war, Beijing is likely to cut back on its spending in areas like infrastructure rather than on military expenditure.