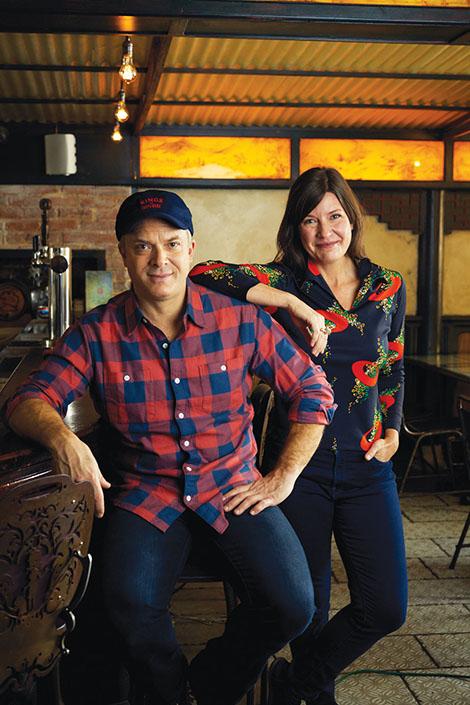 Josh Grinker is an American, but he cooks delicious Chinese food in his Kings County Imperial Restaurant in New York, which attracts diners from all over the world. The Michelin Guide and USA Today both wrote praising Josh for cooking the most authentic Chinese food in New York.

Josh and Jane then became the joint owners of the Kings County Imperial Restaurant, drawing inspiration from the specialties of different regions and different cuisines in China. They used fresh local ingredients from the United States and created an American casual style with Chinese elegance and warmth in the dining area of the restaurant.

When talking about Chinese food, Josh never fails to mention noodles. “I saw an old photograph in which someone was making a particular kind of noodle. The man held a piece of dough in his hand and used a sharp knife to quickly cut the dough into a strip, which fell into the pot. In England, they call it ‘Chop Your Head off Soup.’” He said: “It is very appropriate because the chef can easily cut his own head during the process and the ball of dough looks a bit like a head. For whatever reason, the name sounds cool.”

After graduating from cooking school, Josh got his first job and met a British chef who was once a chef in the Chinese imperial kitchen. Josh’s strong interest in Chinese food culture developed from this chef’s legendary experience and careful guidance. He then teamed up with Jane Young, who came from the same cooking school. They went to China together, working in different cities and different restaurants, and continued to learn and understand various Chinese cooking techniques.

The specialty noodle soup from northern Shaanxi is quite different, being deliciously hot with chewy noodles. Josh and Jane unanimously decided to add it to the restaurant menu. Josh also said: “One of the investors in our restaurant is Chinese. When he first tasted the noodles, it reminded him of the noodle soup his mother had made for him forty years ago. He was tasting it again here. This is the biggest encouragement for us because the most desirable thing for a chef is to evoke the home town flavors of the customers.”

When we asked Josh about his cooking secrets, he said: “Balance is very important when learning to cook Chinese food. The taste of soy sauce, sugar, vinegar, and salt should be harmonized.” In Chinese cuisine, there are different styles, different regional specialties, and unique seasonings. There are more than a dozen dishes using different ingredients. Josh sighs: “With Western food, the plate is the chef’s canvas, but for Chinese food, the whole table is the canvas!”

Josh also said: “It is very general to refer to the foods in China as ‘Chinese food’ similar to calling French, Italian, and Spanish cuisines ‘European food.’ Every one of those great Chinese chefs has almost exhausted their entire careers to embody the food characteristics of their region. We Americans don’t have this disadvantage, so there is no need to deliberately mix Eastern and Western foods, but we put all the dishes from across China into one restaurant. You will find Xiaolongbao, spring rolls, barbecued pork, Mapo tofu, along with Cantonese-style tea dim sum and Northwestern pasta.”

If you want to experience Chinese cuisine carefully prepared by an American chef, then go to Kings County Imperial, in both Brooklyn and Manhattan, to taste the flavors of home.