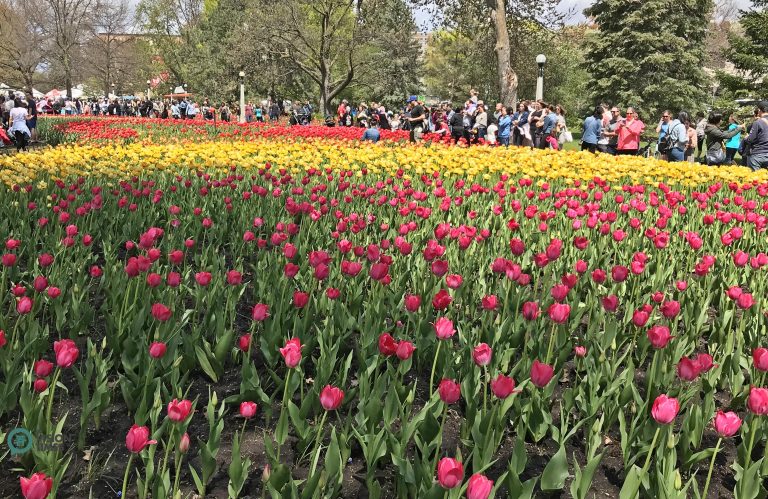 The Canadian Tulip Festival boasts the largest of its kind in the world. (Image: Billy Shyu via Nspirement)

Accepted as one of Ottawa’s most important festivals, the 2019 Canadian Tulip Festival was held from May 10 to 20 at the Commissioners Park on the shores of Dows Lake, and along the picturesque Dows Lake section of Rideau Canal, which is registered as a UNESCO World Heritage Site.

The Canadian Tulip Festival is the largest of its kind in the world. In addition to over 300,000 tulips in dozens of varieties displayed at Commissioners Park, there are millions of tulips planted by the public and private sectors and households all over Canada’s National Capital Region during this time of the year.

Please watch the following video of the 2019 Canadian Tulip Festival.

The festival attracted more than 700,000 visitors from home and abroad, including over 70,000 people visiting on Mother’s Day alone, with another 100,000 people attending the event on the following Saturday, May 18.

The first Canadian Tulip Festival was held in 1953 by the Ottawa Board of Trade (the Ottawa Chamber of Commerce) at the suggestion of world-renowned photographer Malak Karsh. It was held to celebrate and commemorate the historic royal gift of tulips from the Netherlands to Canada after World War II.

During the Nazi occupation of the Netherlands, Dutch Princess Juliana and her family fled to Canada. While in Canda, Princess Juliana gave birth to her daughter Margriet at the Ottawa Civic Hospital in 1943.

In appreciation of Canada’s sheltering of Queen Juliana and her family for three years, the Dutch royal family sent 100,000 tulip bulbs to Ottawa in 1945. Princess Juliana also sent another 20,500 bulbs specifically for an exhibition at the Ottawa Civic Hospital in 1946 and has sent 10,000 tulip bulbs each year since.

The First Canadian Army and the Royal Canadian Air Force also played an important role in the liberation of northern and western Netherlands from September 1944 to April 1945.

In appreciation, the Netherlands has sent 20,000 tulip bulbs to Canada every year as a token of Canada’s assistance in World War II, and the Canadian Tulip Festival has thus been held annually in Ottawa since 1953 to symbolize the friendship between the two countries, and as a celebration of the return of spring. With its popularity and historical significance, the Canadian Tulip Festival attracts hundreds of thousands of Canadian and international visitors every year.