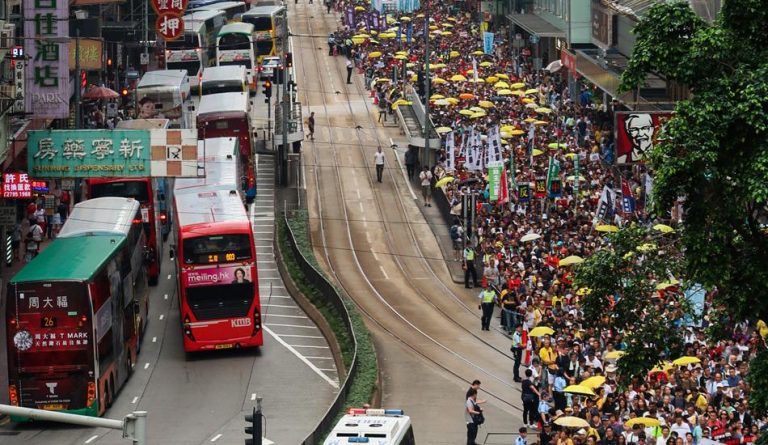 Over a million Hongkongers protested against the government's proposed extradition amendment bill. (Image: Wpcpey via wikimedia CC BY 3.0)

Freedom might not be a right for Hongkongers anymore as a new extradition bill threatens to give China the power to take “criminals” to the mainland. To make the lawmakers know their displeasure, more than a million protesters participated in a massive rally, demanding that the bill not be passed.

Because of the national unification policy adopted by Deng Xiaoping in the 1980s, Hong Kong enjoys a free, liberal society under the “one country, two systems” framework. While still a territory of China, the city has its own political parties and legal systems. In recent years, Beijing has been interfering to a greater extent in the activities of the Hong Kong administration. Citizens do have the right to voice their political views according to city laws. But with the Chinese government breathing down their necks, the city’s government has been actually silencing pro-democracy and free speech activists.

With the extradition bill, activists are now in more danger as arrested people could be handed over to Beijing to be judged under the Chinese communist legal system. As such, people who fight for democracy in China, human rights, freedom of expression, etc. can potentially be arrested in Hong Kong according to Beijing’s request and sent to the mainland. Those who face seven years of imprisonment have a higher chance of extradition, while those awaiting death penalties are exempted. The case will first go to local judges and then be handed over to Hong Kong’s chief executive upon approval.

“We continue to listen to a wide cross-section of views and opinions and remain open to suggestions on ways to improve the new regime,” a government official said. However, the citizens are distrustful of the city administration, believing that the officials might eventually sell them out to the Chinese government by passing the law.

The potential threat to Hong Kong’s freedom has united citizens from all walks of life. Protesters, activists, teachers, students, businessmen, ordinary citizens, as well as children, walked into the streets to fight for their freedom. According to the organizers of the rally, more than 1 million people participated in the protest, which comes to approximately one-seventh of Hong Kong’s total population. The police estimate that there were 240,000 people at the “peak” of the rally.

Most protesters came dressed in white, symbolizing light and justice. They demanded Carrie Lam, the city’s chief executive who supports the extradition bill, give up her seat in the office. The symbol of Hong Kong’s pro-democracy movement, the umbrella, was also raised by many during the event. “This law is dangerous, and not just for activists… We are not activists. Even as regular citizens, we can’t stand to see China eroding away our freedom,” Lee Kin-long, a 46-year-old who participated in the protest, said to The New York Times.

But even with a million people standing against the proposed bill, Karen Chan, a college student, wasn’t sure whether the demonstration will impact the decision of the officials. She knows full well that it is hard to convince the city’s government to drop the proposed amendment. But she hopes that the protest garners enough attention in the international community so that the lawmakers think twice before deciding on the bill.

The Hong Kong government had introduced the bill in response to a request from Taiwanese authorities who asked for the extradition of a Hongkonger suspected of murder in their country. However, the Taiwanese request was used merely as a pretext. The real intention was to get the bill passed so that Beijing will be able to get their hands on anyone facing criminal charges in Hong Kong.