Sword of Goujian Found to Be Sharp and Untarnished After 2,000 Years 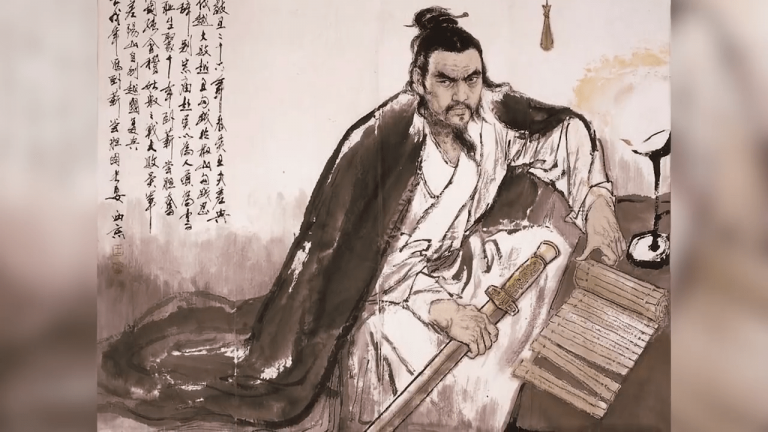 Goujian reigned in China from 496 to 465 B.C. during the Spring and Autumn Period. (Image: Screenshot / YouTube)

When an archaeological team excavated ancient tombs of the Chinese Spring and Autumn Period (771 to 476 B.C.), they discovered a long sword covered with mud. When the team gently wiped off the mud, they found that it was engraved with the Chinese words “King Yue Goujian’s personal sword.” This major archaeological discovery caught the world’s attention, and even more sensational was the report by the researchers who examined this ancient sword.

Researchers had to stop and question how the ancient sword could be as good as new after having been buried for more than 2,000 years. Why was it still shining and sharp? Through further research, it was found that the engraved words were coated with a layer of chromium. Chromium is an extremely corrosion-resistant metal that is rare and extremely difficult to extract even in today’s world. It is also resistant to high temperatures and has a melting point of about 1907°F.

The Germans in 1937, followed by the Americans in 1950, invented and applied for patents to use chromium. So who were the people that used a chromium coating on this 2,000-year-old sword?  In fact, the method of oxidizing chromium to form a layer that acts as a protective coating to prevent corrosion had been very common in ancient China.

From the Tomb of Terracotta Warriors and Horses of Qin Shi Huang, which is considered to be one of the greatest archaeological sites in the world, the archaeological team found a batch of green bronze swords. Each sword measured over two and a half feet long with a total of 8 facets, densely compacted inside. The blades were shining, smooth, and very sharp and the texture was meticulously crafted without the metal interlacing. The swords had been buried under the soil for more than 2,000 years, yet when they were unearthed, they were still shining as new because all were coated with a 10-micron thick chromium salt compound.

Who could’ve imagined that the inventions of the 1930s and the 1950s in the 20th century had already appeared more than 2,000 years ago? The long swords used by the soldiers of Emperor Qin Shi Huang turned out to be masterpieces not yet equaled by our modern science. China’s ancient technology was truly advanced!