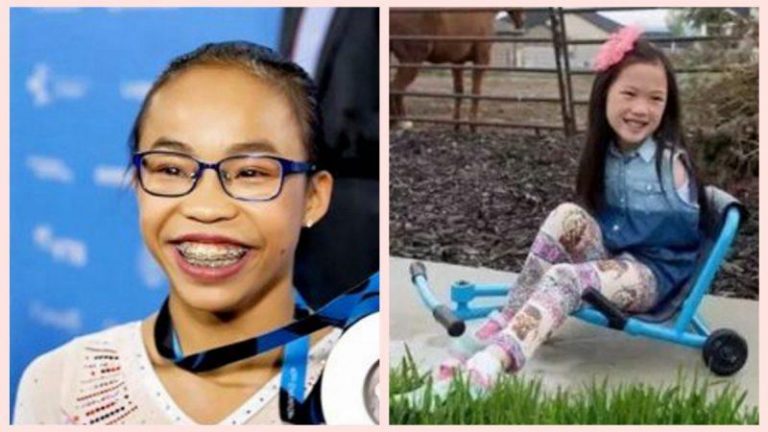 This is the story about two amazing adopted Chinese girls. Every year, about 5,000 orphans are adopted in China, and one in four of them is adopted by a family overseas. Since 1992, nearly 100,000 Chinese children have been adopted by American families. The lives of these adopted children in the United States may exceed the imagination of the average person. Many of the 100,000 adopted children from China in the United States were abandoned for either their physical and mental disabilities or simply because of their gender.

In 2017, at the Gymnastics World Championships in Montreal, Canada, 16-year-old American teenager Morgan Hurd won the women’s all-around finals and helped the U.S. team win five consecutive championships. Morgan is four feet nine inches tall, with braces and black-rimmed glasses. When she stepped onto the podium, 50,000 spectators at the scene cheered for her. Overnight, this little girl with a Chinese face became the pride of the Americans. However, 16 years ago, Morgan Hurd was a baby girl who was abandoned at birth. If she had not been adopted by an American family, it is hard to imagine that she would have been able to accomplish the same achievements.

Sophie Green, a little girl who was born in Luoyang, Henan Province, in 2010, was born with no arms. At the age of 2, she was adopted by an American couple. The young Mr. and Mrs. Green adopted Sophie and her blind sister Lexie. Under the care of the adoptive parents, Sophie can use her feet to brush her teeth, wash her face, comb her hair, eat, ride a bicycle, etc. Most of the things in life can be done by her so she can live independently. In order to allow Sophie to do more things on her own, the Greens made adjustments to most of the equipment at home, replacing the spherical doorknobs with ones that allow Sophie to open doors with her chin and buying a special bicycle so she could cycle to school.

When Sophie first went to school, she was asked by her classmates why she didn’t have arms. She cried and went home. After her adoptive mother found out about this, she went to the school to find Sophie’s classmates to chat with them, playing the video of Sophie’s life. Sophie’s mother explained to everyone that although she did not have arms, Sophie could live like other children. Under the influence of her mother’s optimism, Sophie was loved by her classmates and began to enjoy school life. When she was asked by her new classmates: “Why don’t you have your arms?” she said humorously: “I buried them.”

Sophie has a sweet and bright smile, and her optimistic and confident personality makes her the same as others. Sophie keeps remembering what her adoptive parents often say to her: “Don’t let anyone stop you from doing what you really like.”

Sophie’s adoptive parents have 10 children, seven of whom are from China and have special needs. In order to take care of these children with special needs, the couple built a house adapted to facilitate the children’s’ lives. When asked why they adopted these disabled children, the kind couple replied: “We didn’t intend to adopt a disabled child, but we ended up doing it every time. Maybe this is what God wants us to do.”