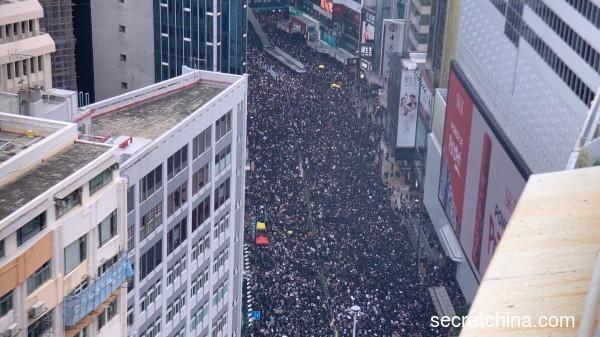 Thousands of Hongkongers have taken to the streets, demanding that the government not pass an extradition law that would give China the right to judge people from the city in the mainland. (Image: Secret China)

Millions of Hongkongers have taken to the streets, demanding that the government not pass an extradition bill that would give China the right to judge people from the city in the mainland. After violence erupted in one of the recent protests, it seems as if the city’s government has been shaken by the people’s convictions, as Chief Executive Carrie Lam announced that the administration has suspended the controversial bill.

“We have made many attempts to narrow differences and eliminate doubts… In the last week, thousands of people took part in protests and gatherings. Serious conflicts broke out … resulting in a number of police officers, media workers, and other members of the public being injured. I am saddened by this,” Lam said in a statement (CNN). A second reading of the bill that was due this month has been canceled. She hoped that suspending the bill would restore the city back to its calm state and that failure to do so would be a death blow to the society.

Suspension of the bill now raises a question mark over the future of Lam, who became Chief Executive two years ago. Lam has already indicated that she would step down if public opinion turns against her in a significant way. Pro-democracy group Civil Human Rights Front has asked for Lam’s resignation. As to the suspension, it failed to calm the situation in Hong Kong as protesters once again took to the streets in greater numbers on Sunday, June 16.

Civic Party founder Dennis Kwok has demanded that the government withdraw the extradition bill. Politician Claudia Mo from the pan-democracy camp warned that they will not retreat as long as the extradition bill remains active. She asked that people arrested during protests be released, terming police action as a witch hunt. Meanwhile, several business chambers in the city announced their satisfaction at the bill’s suspension.

“We welcome the government’s decision to suspend resumption of the second reading of the extradition bill, which will allow things to cool down and let everyone return to rational debate… We look forward to the government continuing to engage in constructive discussions with stakeholders and the public to address and eliminate doubts about the bill,” Aron Harilela, Chairman of the Hong Kong General Chamber of Commerce, said in a statement (South China Morning Post).

China unhappy with the US

Beijing summoned a U.S. envoy and lodged a protest against the actions of several American lawmakers who supported the protests in Hong Kong. Earlier, a bipartisan group of U.S. legislators had re-introduced a bill that demanded the American government to review the special trading privileges it gives to Hong Kong. The bill was meant to protect the basic human rights of Hongkongers so that they don’t end up under communist control.

“Hong Kong affairs are purely China’s internal affairs. No other country, organization, or individual has the right to interfere… China deplores and firmly opposes the irresponsible and erroneous comments on the amendment and other Hong Kong affairs made by the U.S. side… We urge the U.S. to view the relevant amendment in a fair and just manner, exercise caution in its words and deeds, and stop in whatever form interfering in Hong Kong affairs and China’s domestic affairs,” Geng Shuang, Chinese Foreign Ministry spokesman, said in a statement (Breitbart).