Astronomers Criticize Musk After He Puts 60 Satellites in Orbit 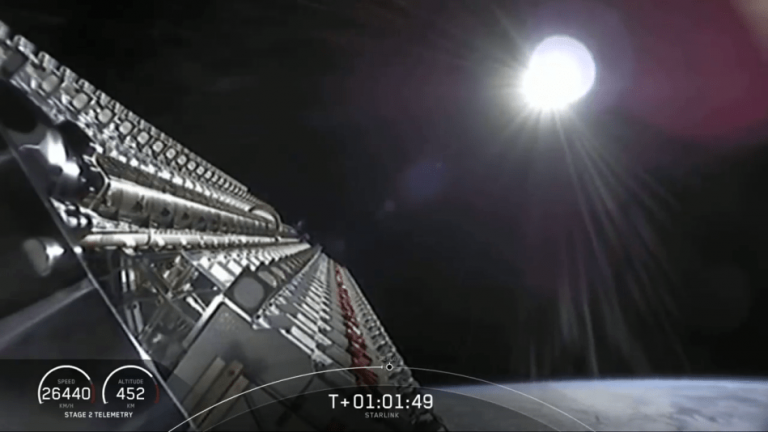 On May 23, SpaceX launched 60 satellites into space as part of the Starlink project. (Image: Screenshot )

On May 23, SpaceX launched 60 satellites into space. A part of the Starlink project, these are the first batch of a proposed 12,000 satellites that the company plans on deploying in Earth’s orbit so as to give wireless broadband Internet access to the entire world. However, astronomers are not happy about the project and are accusing Musk’s company of ruining the view of the night sky.

“[An uncrowded night sky is] not only essential to advancing our understanding of the Universe of which we are a part, but also as a resource for all humanity and for the protection of nocturnal wildlife… We do not yet understand the impact of thousands of these visible satellites scattered across the night sky and despite their good intentions, these satellite constellations may threaten both,” the International Astronomical Union (IAU) said in a statement (CNBC).

The IAU is an association of 13,000 global astronomers, which gives legitimacy to their concerns. Alex Parker, an astronomer from the Southwest Research Institute, noted that the brightness of the recently launched 60 satellites could prove to be a hindrance for tracking stars and other heavenly bodies in space. Since highly sensitive telescopes are used to detect stars in the sky, the brightness from the satellites will prevent telescopes from properly imaging the universe. Plus, since the satellites will communicate back to Earth through radio signals, it could affect radio telescopes as well. Parker believes that if SpaceX launches all 12,000 satellites as planned, they will end up outnumbering the stars visible to our naked eye.

Musk has brushed off such concerns, stating that the Starlink project will not negatively affect astronomical study in any manner. “There are already 4,900 satellites in orbit, which people notice ~0% of the time. Starlink won’t be seen by anyone unless looking very carefully & will have ~0% impact on advancements in astronomy. We need to move telescopes to orbit anyway. Atmospheric attenuation is terrible,” he said in a tweet.

In addition to SpaceX, there are other private companies that are seeking to deploy such large-scale satellite networks in orbit. Amazon’s Project Kupier aims to have about 3,000 satellites in space. Telesat is said to be working on a 292 satellite network. OneWeb’s planned 648 satellite constellation saw the first batch of six satellites deployed earlier this year.

The Starlink project could give SpaceX a huge source of revenue that could be used to fund its space exploration plans. Not only could the satellites be used to provide high-speed Internet across the globe, but they could also power future technologies like driverless cars even in regions that do not have a high-speed broadband infrastructure. If such opportunities are exploited well, SpaceX stands to make billions of dollars.

“To build the Starship and Mars Colonial Transporter they need a big revenue channel coming in. At the moment SpaceX has £3billion [US$3.76 billion] coming in annually from launches, but they need more than that to get to Mars,” Manny Shar, head of analytics at Bryce Space and Technology, said to Express.