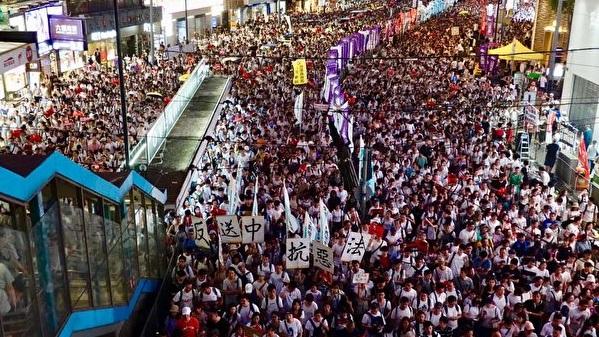 During the second week of June, more than one million people in Hong Kong took to the streets to protest against the plan to strip away judicial independence. (Image: Secret China )

During the second week of June, more than one million people in Hong Kong took to the streets to protest against a to strip away judicial independence by the Hong Kong government and the Chinese Communist Party (CCP). The mass demonstration was the largest in Hong Kong’s recent history.

Hong Kong has a long tradition of freedom of speech and human rights and is viewed as a bridge between the dictatorship in mainland China and the free world. As a platform for China to progress towards democracy, the Hong Kong people have consistently demonstrated their conscience and courage over the years.

On July 1, 2003, 500,000 protesters took to the streets to oppose the implementation of Article 23 of the Basic Law by the Hong Kong government and the CCP. Under enormous international pressure, the amendment was withdrawn. In 2014, the Umbrella Movement was initiated by Hong Kong people against the tyranny of the CCP. Fast forward to today, and Hong Kong people have once again taken to the streets again to oppose the extradition bill in the largest protest movement in some thirty years.

Hong Kong has been a safe haven for generations of people fleeing from the mainland seeking freedom, but today, that safe haven is threatened. While Hong Kong’s freedom is under siege, its people are revealing to the world that they will not be trampled under the boot of the CCP.

Carrie Lam, as the Chief Executive of Hong Kong, has no real power under the CCP regime. As a Hongkonger, instead of defending the rights of her people, she has chosen to slowly chip away at them. She has opposed the interest of her people and revealed herself to be a willing tool for Beijing.

The CCP is a symbol of political paranoia amid growing unrest both inside and outside of China. Its actions in response to the protest in Hong Kong in the coming days will reveal to the world its true nature. As Winston Churchill once said: “Socialism is the philosophy of failure, the creed of ignorance, and the gospel of envy.”

Written by Xia Xiaoqiang, translated by Chua BC, edited by Angela