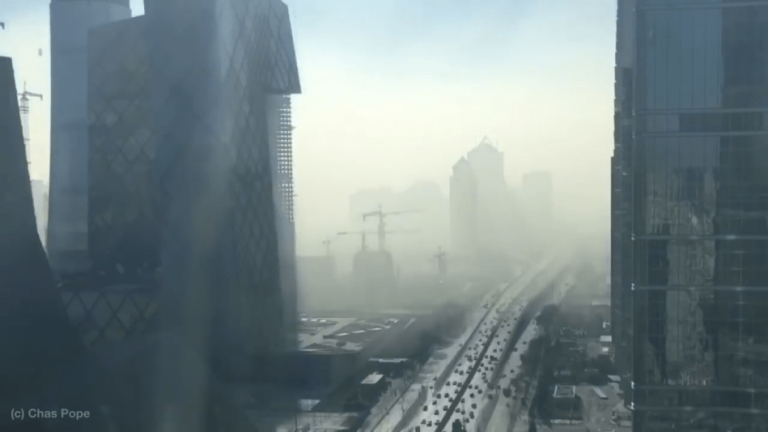 Beijing has denied being responsible for the rapid increase in global emissions of CFC-11, a chlorofluorocarbon that is known to damage the ozone layer. (Image: Screenshot / YouTube)

Beijing has denied being responsible for the rapid increase in global emissions of CFC-11, a chlorofluorocarbon that is known to damage the ozone layer. During the Montreal Protocol in 1987, multiple nations agreed to phase out CFC emissions to protect the ozone layer and prevent climate aberrations. However, a recent report in the magazine Nature revealed that CFC emissions were spiking as the compound was being used widely in China.

The report identified the provinces of Hebei and Shandong in eastern China as being the source of almost 40 percent of CFC emissions. “Air samples collected in South Korea and Japan point a big fat guilty finger directly at eastern China where CFC-11 emissions averaged 6,400 metric tons annually from 2008-2012. That number increased to 13,400 metric tons annually from 2014-17. Additionally, on-the-ground investigations by the International Environmental Investigation Agency confirmed the atmospheric tests of Chinese manufacturing of CFC-11,” according to City Watch.

The Chinese Ministry of Ecology and Environment (MEE) criticized the report, calling it unsubstantiated. The ministry said that the methodologies used by researchers were faulty and that their own national inspection results contradict the report’s findings. It argued that officials strictly conduct scheduled checks on factories and that any establishment found using the gas would be shut down immediately.

Despite the ministry’s assurances, it would be hard to trust Chinese figures since the state typically fudges data in their favor. Since an increase in CFC emissions would make China a violator of the Montreal Protocol, the government has a strong reason to criticize the Nature report. A U.S. state department official commented that the report presented a huge problem since it would mean that other countries will have to suffer the environmental consequences of China’s irresponsible actions.

To make matters worse, China could actually be emitting much more CFC than what has been estimated by the researchers. “There’s a chance that we’ve only seen the tip of the iceberg so far… If what we’ve detected is actually only a small fraction of the additional new, illegal production that’s happened since 2010, then the problem could be larger than what we’ve detected so far,” Stephen Montzka, a National Oceanic and Atmospheric Administration scientist, said to The Washington Post.

China’s methane emissions are also surging at an alarming rate. Methane is known to trap 28 times more heat in the atmosphere, thereby acting as a major climate change pollutant. In 2010, Beijing had passed a set of policies aimed at capturing methane from coal mines and converting it into carbon dioxide. But such actions have not produced any concrete results. Between 2010 and 2015, methane emissions from the country rose by 50 percent.

“China has had great ambitions for capturing that methane and using it for electricity production or heating buildings, but what we found is that there’s little evidence that they’ve been able to meet those ambitions… In terms of methane, China’s emissions are so much larger than any other country that anything they could do to mitigate their emissions could have a substantial impact on overall methane levels in the atmosphere,” Scott M Miller, lead researcher of the report, said to CNN.

In 2015, China toppled the U.S. as the country most responsible for global warming. In 2017, President Xi targeted pollution as one of his “three battles.”