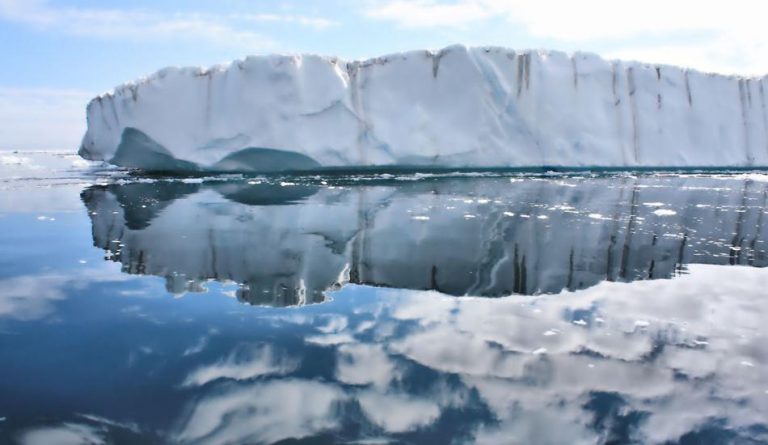 Greenland is home to an ice sheet that is the second largest in the world. (Image: via Wikimedia Commons)

An ice sheet in Greenland is the second largest in the world. With an area of 660,000 square miles, the sheet covers about 80 percent of the island and is over 1.2 miles thick. Though we have known for some time that the ice sheet in Greenland has been melting, new research suggests that the process is happening at a much faster pace than earlier estimated.

A study conducted by Luke Trusel, a climate researcher at Rowan University, has found that the meltwater runoff from the ice sheet in Greenland has risen by 50 percent since the industrial era began. If these findings are correct it would mean that Greenland is contributing to the rise of sea levels in a way that has never occurred in the past 350 years. Researchers are warning that global sea levels will rise by up to 12 inches by 2050, which is enough to sink many coastal cities.

For their study, the researchers used ice cores that are drilled from sheets of ice. Analyzing these ice cores helps climatologists calculate the history of melting year by year. The intensity of melting is determined by measuring the thickness of seasonal ice layers in the ice cores. The researchers then combine the data with climate model programs and satellite measurements to forecast how the ice sheet might respond in the event of global warming caused by greenhouse gas emissions.

“Once the ice sheets get kicked into motion, they just keep going. This is a wake-up call that shows how fast Greenland is changing… We think there’s a tipping point around 1.5 Celsius of [global] warming to 2 degrees Celsius of warming that would commit the ice sheet to melting for centuries or millennia, based on paleoclimate records,” Luke Trusel, co-author of the new study, said in a statement (Inside Climate News). Some researchers have predicted that global temperatures will reach that level between 2030 and 2052.

Rain is also becoming a much more frequent phenomenon in Greenland, thereby accelerating the melting of the ice sheet. A few decades back, there used to be only two spells of rain in winter. But by 2012, Greenland started seeing up to 12 occasions of rain. Between 1979 and 2012, more than 300 incidents of rain were seen to have triggered the melting of the ice. “This opens a door to a world that is extremely important to explore… The potential impact of changes taking place in the winter and spring on what happens in summer needs to be understood,” Marco Tedesco, a professor at Columbia University, said to BBC.

A study led by Nick Golledge from Victoria University of Wellington also rings alarm bells over the melting ice sheet in Greenland and Antarctica. He feels that it would bring about more extreme and irregular weather across the world, with hot and cold snaps in some regions getting longer while wet spells would start becoming soggier.

“According to our models, this melt water will cause significant disruptions to ocean currents and change levels of warming around the world… Melt from these ice sheets is going to significantly disrupt the global climate, making temperatures in some areas vary much more from one year to the next… This unpredictability is going to prove extremely disruptive for all of us and will make adaptation and planning much more difficult,” Nick said in a statement (USA Today).

Another study, led by Tamsin Edwards of King’s College London, says that even though sea levels may increase due to the melting ice sheet in Greenland, the amount will be limited to 5 to 6 inches. However, this study predicts a 5 percent chance of a sea-level rise of 15 inches by 2100.