Pompeo: ‘The CCP Demands It Alone Be Called God’ 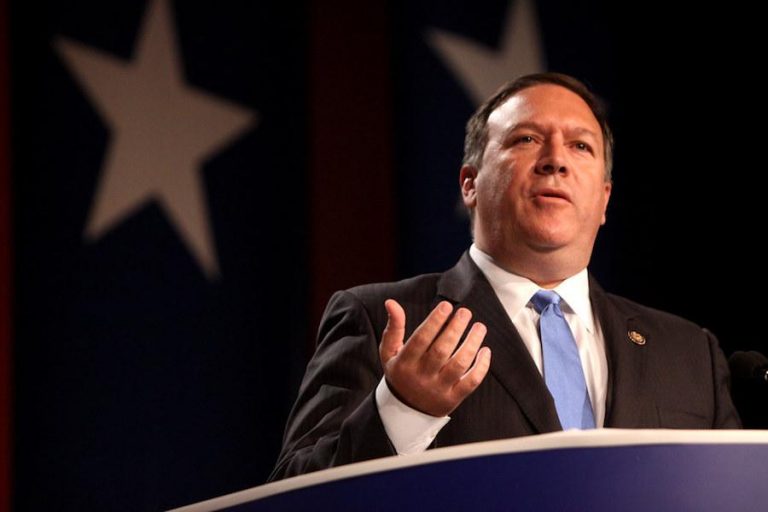 U.S. Secretary of State Mike Pompeo has called out the Chinese Communist Party over its persecution of people in faith.

Pompeo highlighted the communist regime’s treatment of Chinese people who adhere to a spiritual path during the June 21 release of the 2018 Annual Report on International Religious Freedom.

“In China, the government’s intense persecution of many faiths — Falun Gong practitioners, Christians, and Tibetan Buddhists among them — is the norm,” Pompeo said.

“The Chinese Communist Party has exhibited extreme hostility to all religious faiths since its founding. The party demands that it alone be called God,” he said.

Pompeo is a past CIA director, but also way before that, a Sunday school teacher and a church deacon. At the beginning of the press conference, he touched upon his own spirituality.

“But I am one of millions of Americans, and billions of people across the world, who live in the knowledge of a higher power,” he said.

“I often humbly reflect on how God’s providence has guided me to this office, to defend this cause. I think about how, as an American, I’ve been blessed to enjoy the unfettered exercise of religious freedom, our first liberty here in the United States.”

See Pompeo deliver his remarks on the report at the U.S. Department of State in Washington, D.C., on June 21.

Pompeo highlighted the plight of the Uyghurs, ethnic Kazakhs, and members of other Muslim groups who have been subjected to a harsh crackdown that includes up to more than 2 million people being locked up in detention facilities in the Xinjiang region in China’s far west.

“I had a chance to meet with some Uyghurs here, but unfortunately, most Chinese Uyghurs don’t get a chance to tell their stories,” Pompeo said.

“That’s why, in an effort to document the staggering scope of religious freedom abuses in Xinjiang, we’ve added a special section to this year’s China report,” he said.

In the report’s executive summary, those Turkic Muslims held in the detention facilities have been subjected to forced disappearance, torture, physical abuse, and prolonged detention without trial. This has been occurring since April 2017, the report said.

“History will not be silent about these abuses — but only if voices of liberty like ours record it,” Pompeo said.

See this recent BBC report on the situation in Xinjiang.

More broadly, the report described a dire situation for anyone looking to practice a faith outside of the Chinese government’s control.

“Only religious groups belonging to one of the five state-sanctioned ‘patriotic religious associations’ [Buddhist, Taoist, Muslim, Catholic, and Protestant] are permitted to register with the government and officially permitted to hold worship services,” the report said.

“There continued to be reports of deaths in custody and that the government tortured, physically abused, arrested, detained, sentenced to prison, or harassed adherents of both registered and unregistered religious groups for activities related to their religious beliefs and practices,” it said.

Among the abuses the report described was that of forced organ harvesting. Citing a Wall Street Journal article, the report said Chinese authorities have killed prisoners of conscience — including Falun Gong practitioners, Uyghurs, Tibetan Buddhists, and underground Christians — for their organs.

The report cited the work of the international NGO International Coalition to End Transplant Abuse in China, an independent tribunal that recently found it was “certain — unanimously, and sure beyond reasonable doubt — that in China, forced organ harvesting from prisoners of conscience has been practiced for a substantial period of time, involving a very substantial number of victims.”

The tribunal’s findings stated that Falun Gong practitioners were the main victims of organ harvesting in China.

Speaking at the release of the U.S. report was Sam Brownback — the Ambassador at Large for International Religious Freedom — who also singled out China and organ harvesting.

“We share reports — again, that others make — that Chinese authorities have subjected prisoners of conscience, including Falun Gong, Uyghurs, Tibetan Buddhists, and underground Christians, to forcible organ harvesting,” Brownback said. “This should shock everyone’s conscience.”

Watch this CBN report on the tribunal below: