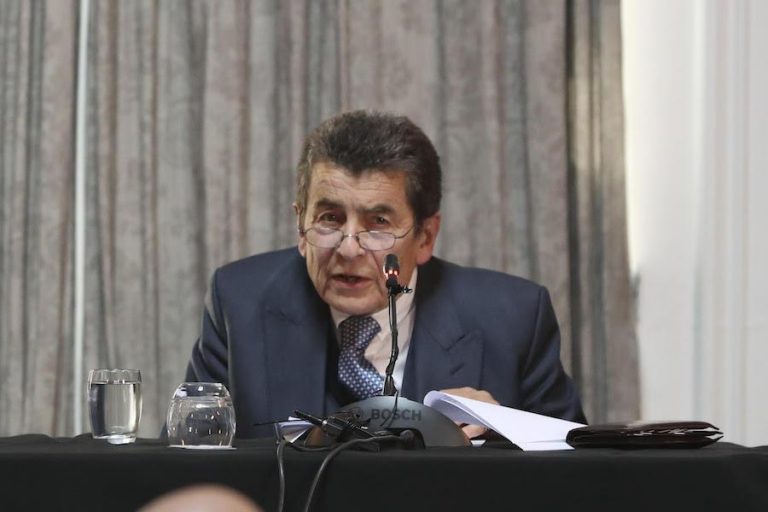 Sir Geoffrey Nice QC, chair of the China Tribunal which found that large numbers of Falun Gong practitioners have been killed for their organs in China. (Image: Justin Palmer)

It has been proven beyond doubt that the Chinese state is killing large numbers of prisoners of conscience for their organs and the world must act to end it were part of a final judgment made by an independent tribunal.

These statements were part of a final conclusion from the China Tribunal’s final judgment delivered by former international war crimes prosecutor Sir Geoffrey Nice QC in London on June 17.

“Forced organ harvesting has been committed for years throughout China on a significant scale and that Falun Gong practitioners have been one — and probably the main — source of organ supply,” the judgment said.

Based on a year-long investigation, the judgment’s findings prompted worldwide media attention over an atrocity that first came to light in 2006 following claims that imprisoned Falun Gong practitioners were being killed for their organs in northeastern China.

In its conclusion, the tribunal called on governments and international bodies to do their duty and step up to address this atrocity.

“Governments and any who interact in any substantial way with [China] … should now recognize that they are, to the extent revealed above, interacting with a criminal state,” said the tribunal.

The conclusion provided examples of who interacts with China, which included doctors and medical institutions; industry, and businesses, most specifically airlines, travel companies, and educational establishments.

The tribunal said organ harvesting is part of what has been described as a genocidal campaign against Falun Gong, which has been targeted by the communist state since 1999.

“The tribunal notes that forced organ harvesting is of unmatched wickedness even compared — on a death for death basis — with the killings by mass crimes committed in the last century,” the tribunal said.

“There is justifiable belief in the minds of some or many — rising to probability or high probability — that genocide has been committed,” the tribunal said.

“In line with this, and by considering the evidence and the law, there can be no doubt that there is a duty on those who have the power to institute investigations for, and proceedings at, international courts or at the UN to test whether genocide has been committed.

“They should act immediately to determine accountability for any acts contrary to the provisions of the Genocide Convention.”

After the tribunal’s judgment, Rogers said governments, especially those that profess to care about human rights, must take its conclusions seriously.

“If they disagree with the findings, they must provide clear evidence and analysis as to why. If they can’t, and they won’t speak out, silence must be taken as complicity,” Rogers wrote for Catholic media ucanews.com.

“The populace in democratic societies must press their elected representatives on this — apathy in the face of such crimes is not an option,” he stated.

“Those who deny this barbaric crime should — unless other evidence arrives to the contrary — ought to be presented as akin to Holocaust deniers.”

In a statement, DAFOH said that the tribunal’s findings recognize that some elements of genocide are “clearly established” and urged Congress to launch formal proceedings to determine the extent of the practice and the degree to which it constitutes genocide.

“The tribunal’s judgment demonstrates beyond all doubt that China is continuing to kill prisoners of conscience for their organs. We believe that forced organ harvesting in China is linked to other prolific abuses of this target group and amounts to a deliberate campaign of genocide against Falun Gong practitioners,” said Dr. Torsten Trey, executive director of DAFOH.

The tribunal’s report coincides with the one-year anniversary of an academic article, co-authored by members of DAFOH, which first described the organ harvesting campaign as a “cold genocide” against Falun Gong practitioners in China.

One characteristic of a “cold genocide” is that the eradication of the targeted group occurs in a slow-moving manner, said Trey. The Chinese regime’s framing of Falun Gong as a “cult” has misled the Chinese people and the international community, preventing unbiased investigations of the genocide carried out against practitioners, DAFOH said in their statement.

“The campaign to label Falun Gong as a ‘cult’ has become part of the cold genocide, as it tries to conceal the eradication of the group,” said Trey.

DAFOH said that Falun Gong is known worldwide as a peaceful, orthodox Buddhist qigong practice. The debunking of the false “cult” designation is an important first step to objectively examining the occurrence of crimes against humanity. An unbiased, fair investigation of the forced organ harvesting of Falun Gong practitioners will contribute to ending the malpractice and may benefit all other prisoners of conscience subjected to this transplant abuse, including Uyghurs, Tibetans, Christians, and others, DAFOH said.

But according to a 2017 Freedom House report, the persecution failed to achieve its goal, and millions of Mainland Chinese still adhere to the meditation practice.

The report estimated that 7-10 million people continue to practice Falun Gong in China, while Falun Gong sources outside of China give a figure of 20-40 million.

“It’s fair to ask for accountability. In fact, it’s the only way that things are going to move here because we can’t just do this,” Gutmann said. “We have to exert the pressure, which then will be felt in China.”

But Gutmann said the “big player” in addressing this issue is not politicians, it’s the medical community in the form of The Transplantation Society, which has accepted the Chinese state’s unverified claims that its organ transplant industry is aboveboard.

“You see, China’s very, very eager to be accepted in the Western medical community,” he said. “And that’s why it was so important to them when the Transplantation Society came out and gave them a clean bill of health… And if doctors, the medical community persists in sort of giving China the benefit of the doubt, giving this constantly on this, this is very dangerous for the world,” he said.

“This creates a false confidence in China, which absolutely shouldn’t be there when they should be punished for this.”

In 2014, Gutmann was nominated for the Nobel Peace Prize for his work exposing forced organ harvesting in China. His investigations into organ harvesting were published in the book The Slaughter in the same year.

He is an ETAC cofounder and coauthor of a 700-plus-page report in mid-2016 that demonstrated the extent of forced organ harvesting in China.

The report estimated that 60,000 to 100,000 organ transplants are performed annually in China. Among the evidence used to calculate these figures was data from hospital revenues, transplantation volumes, bed utilization rates, surgical personnel, training programs, and state funding.

They concluded the source for these organs remained prisoners of conscience despite China’s effort to sell to the world the idea they were moving toward having a functioning donation system and declarations saying they had outlawed the use of prisoner organs in 2015.

A U.S. House of Representatives resolution was unanimously passed in mid-2016 that urged the Chinese regime to stop harvesting the organs of prisoners of conscience and end the persecution of Falun Gong.

Taiwan, Israel, and Spain have all banned organ tourism to China.

“We share reports — again, that others make — that Chinese authorities have subjected prisoners of conscience, including Falun Gong, Uyghurs, Tibetan Buddhists, and underground Christians, to forcible organ harvesting,” Brownback said on June 21. “This should shock everyone’s conscience.”

Watch this China Uncensored report from April on organ harvesting and the tribunal: