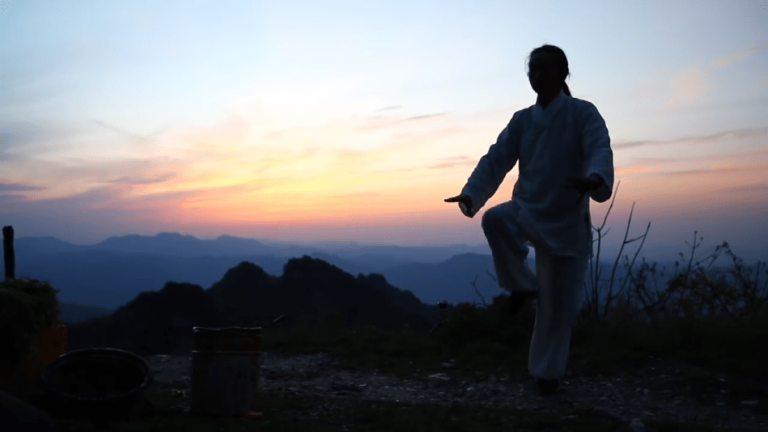 Zhang Sanfeng, born circa A.D. 1247, the founder of Tai Chi, was a cultivator in the Ming Dynasty. He led a very simple life, owning no material items except what he wore, a tunic made of dry plant strips and a hat made of dry grass stems.

He wandered everywhere and his whereabouts were uncertain. With his supernormal abilities, sometimes he appeared thousands of miles away in a day; sometimes people in a certain place saw him dead, and then people saw him laughing and talking elsewhere. Emperor Hongwu and Emperor Yongle both admired him very much and sent messengers to search for him, but they never succeeded in finding him. Eventually, whether he was alive or not became a mystery.

One day, Zhang Sanfeng wandered to see the King of Qiyang and was very well received. As Zhang Sanfeng was leaving, he gave his tunic and hat to the king and said: “In no less than a thousand days, there will be a disaster in which your whole family will be in danger of starving to death. During the crisis, you can wear my tunic and my hat. Then walk around the garden calling my name.” Though the king believed that starvation was impossible since he was so rich that his wealth could easily serve many generations, he still treasured the gifts very much and took good care of them.

Two years later, a political purge suddenly emerged and King Qiyang was one of the targets. Both he and his family were placed under house arrest with no food. Going out to buy food was also prohibited. Seeing that they would soon have nothing to eat, King Qiyang remembered Zhang Sanfeng’s words and did as instructed. While wearing the tunic and hat, he called on Zhang Sanfeng. Immediately in all the courtyards of the house, millet grew densely and became mature in less than a month. The whole family survived by eating the millet. After the millet was all consumed, a food supply to King Qiyang was granted. When King Qiyang tried calling on Zhang Sanfeng again, the millet failed to grow as he did not need the help.

From then on, King Qiyang regarded Zhang Sanfeng’s gift as a talisman. When family members became ill, they could be cured by drinking the water made by soaking a strip taken from Zhang Sanfeng’s tunic. A high-ranking eunuch in the emperor’s palace got dysentery. Using his position to benefit himself, he took away Zhang Sanfeng’s tunic and hat for his own purposes. He took a strip from the tunic, boiled it in water, and drank it expecting to be cured. However, he became more ill and died. Later, the tunic and hat were retrieved and returned to the palace where they were treasured.