Europe Reeling Under a Dangerous Heatwave 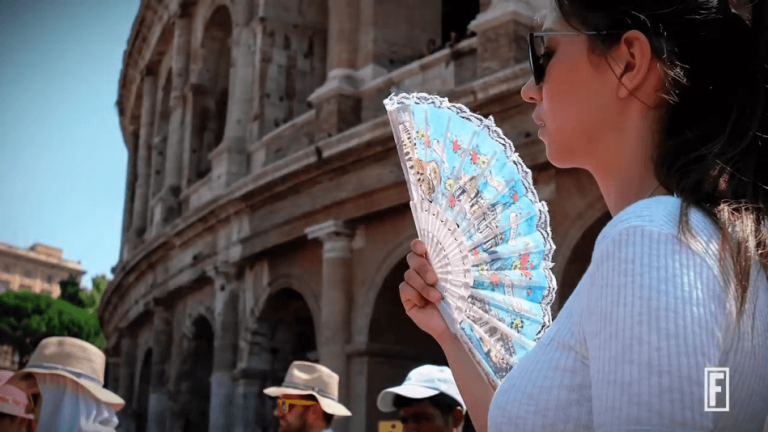 People in Europe are currently suffering through one of the worst heatwaves in the region’s history. (Image: Nspirement)

People in Europe are currently suffering through one of the worst heatwaves in the region’s history. The rising temperatures have caused several deaths and forced people to stay indoors.

“Heatwaves occur across northern Europe when high atmospheric pressure draws up hot air from northern Africa, Portugal, and Spain, raising temperatures and increasing humidity. In this instance, the exceptionally hot air has come from the Sahara… [Heatwaves] are being amplified by a rise in global temperatures and are likely to become more frequent — one of the more predictable impacts of our warming climate,” according to BBC.

In Germany, temperatures are closing in on 104°F. Authorities have restricted driving speed in some areas to 72 mph since road surfaces have begun to show signs of deterioration. In Rostock, some rail tracks have buckled. In Spain, hot conditions triggered a forest fire in the region of Catalonia. Almost 6,000 acres of land was destroyed. In Poland, 90 people drowned while trying to get relief from the heat in lakes or rivers. In Denmark, a weather station reported a tropical night, meaning that the temperature did not fall below 68°F for the night. This is the earliest tropical night recorded in Denmark in 19 years.

In France, temperatures in some regions exceeded 104°F. Schools have been shut down in some parts of the country. Older cars have been banned from entering certain cities in a bid to cut down pollution. Health minister Agnes Buzyn has asked retirement homes and hospitals to be on high alert. The heatwave of last summer caused 1,500 deaths in the July-August period. Parents have been advised to keep their children from playing outside, since increased exposure could lead to dehydration and heatstroke.

French news station LCI warned that temperatures in the coming days will be higher than average by up to 30°F. “We’re talking about an exceptional, even unprecedented heatwave… Temperatures are going to be near 104°F for most of the country and because it’s arriving at a particularly humid time of the year, it feels particularly unpleasant,” Guillaume Woznica, a meteorologist at LCI, said to Time. Since 1500, the top five warmest summers in Europe have all been recorded in the last 20 years.

The hot temperatures have also started affecting the wine industry in France. Workers have been asked to start their jobs early in the day. In some places, vineyard workers begin work as early as 5 a.m. and end their shift by midday.

“Members of my team in the vineyards have to start very early in the morning before dawn and need to finish before noon before the heat becomes unbearable… A heatwave later in the season — in July, but especially in August — is more problematic as it creates the possibility of water stress, as well as l’échaudage des raisins, where the grapes are scorched by the sun,” Antoine Malassagne, co-owner at Champagne AR Lenoble, said to Decanter.

If the hot weather continues, soil in some regions of France’s vineyards could dry up. This can trigger the vines to start dying from the tips of their leaves or roots backward and end up affecting the production of wine. On the plus side, the heatwave could potentially reduce the risk of diseases in the vineyard.