Beijing Communists Cower Under the Steadfast People of Hong Kong 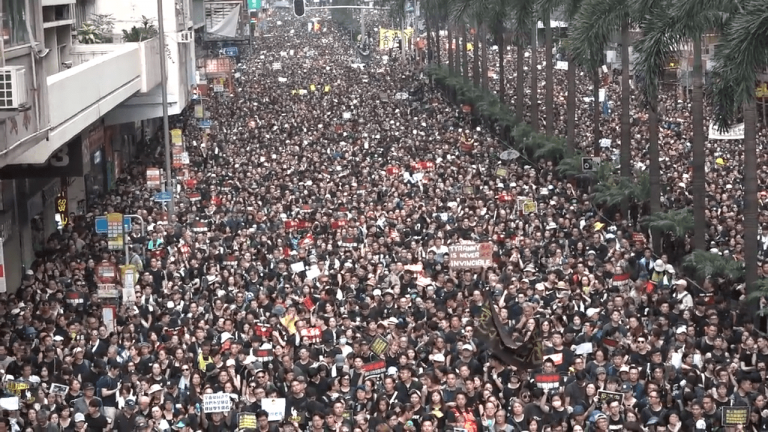 The recent protests by Hongkongers have shaken Beijing, making them realize that people are not just going to sit on the sidelines while the Chinese government takes control of the city. (Image: Screenshot / YouTube)

When China came to “own” Hong Kong in 1997, it had a long-term plan for bringing the city under communist control. But the recent protests by Hongkongers have shaken Beijing, making the Chinese government realize that people of the city are not just going to sit on the sidelines while they take control.

When citizens of Hong Kong protested against the recent extradition bill, it was not just the legislation that they were protesting against. The public was letting the Chinese government know that they are not welcome in the city. A worried Beijing immediately started blaming the U.S. for triggering “chaos” in Hong Kong. Even HK Chief Executive Carrie Lam went along with the “foreign intervention” propaganda, never able to admit that the extradition bill was clearly a mistake and an insult to the liberty-loving people.

This has worried many Hongkongers and pro-democracy activists who believe that Beijing and Lam are just biding their time to pass the bill. “It’s worrying that Carrie Lam and many others in the pro-establishment camp believe that this is being driven by foreign forces… This is wrong, condescending, and dangerous,” Mark Clifford, Hong Kong resident and a former editor of the South China Morning Post, said in a statement (Fox News).

What is more worrying to Beijing is the fact that the Hong Kong protests seem to have renewed Taiwan’s anti-China sentiment. Most Taiwanese strongly supported the Hong Kong protests on social media, arguing that if the city is allowed to fall under China’s control, then Taiwan would be next. Beijing’s proposal of “one country, two systems” is being heavily criticized in Taiwanese social media as people realize that if China can’t honor their promise to Hong Kong, then they will certainly not honor the arrangement should Taiwan agree to it.

“If I had the chance to become the president of the Republic of China, [I] guarantee there will never be one country, two systems on Taiwanese soil, unless … unless … unless … over my dead body… There were so many people taking to the streets because the Hong Kong government did not heed its citizens … it is so terrible,” Han Kuo-yu, a mayor from Taiwan, said in a statement (South China Morning Post).

There had been speculation that the Hong Kong protests would be discussed at the G20 meeting in Osaka. However, Chinese assistant foreign minister Zhang Jun recently stated that this would not be the case. “What I can tell you for sure is that G20 will not discuss the Hong Kong issue. We will not allow G20 to discuss the Hong Kong issue… Hong Kong is China’s special administrative region. Hong Kong matters are purely an internal affair to China. No foreign country has a right to interfere… No matter at what venue, using any method, we will not permit any country or person to interfere in China’s internal affairs,” he said in a statement (The Guardian).

Trump and Xi agreed to resume trade negotiations during the G20 meeting. President Trump only spoke briefly to the Chinese leader about Hong Kong, although several U.S. lawmakers had urged him to tie the issue of Hong Kong to the trade talks. However, if China goes ahead with the plan to bring Hong Kong under its full control, there is a good chance that Trump might revoke the special business status America has assigned to the city.