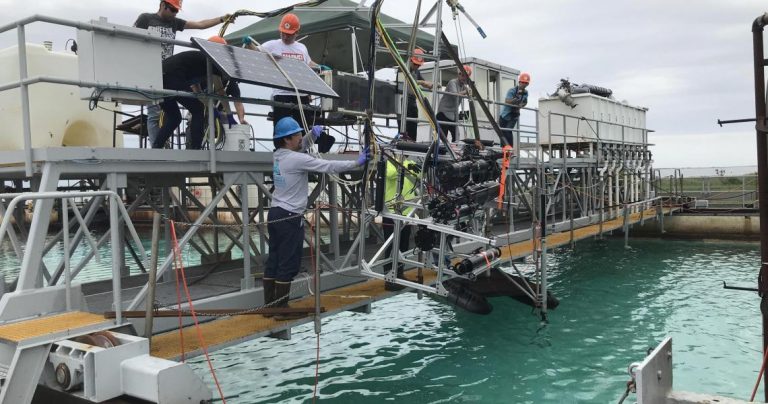 In a 600-ft-long saltwater wave tank on the coast of New Jersey, a team of NJIT researchers is conducting the largest-ever simulation of the Deepwater Horizon spill to determine more precisely where hundreds of thousands of gallons of oil dispersed following the drilling rig’s explosion in the Gulf of Mexico in 2010.

Led by Michel Boufadel, director of NJIT’s Center for Natural Resources (CNR), the initial phase of the experiment involved releasing several thousand gallons of oil from a one-inch pipe dragged along the bottom of the tank in order to reproduce ocean current conditions, Boufadel said:

“The facility at Ohmsett allows us to simulate as closely as possible the conditions at sea, and to thus observe how droplets of oil formed and the direction and distance they traveled.”

Later this summer, his team will conduct the second phase of the experiment, when they will apply dispersants to the oil as it shoots into the tank to observe the effects on droplet formation and trajectory.

His team’s research, conducted at the U.S. Department of the Interior’s Ohmsett facility at Naval Weapons Station Earle in Leonardo, N.J., was detailed in a recent article, The perplexing physics of oil dispersants, in the Proceedings of the National Academy of Sciences (PNAS). He noted:

“These experiments are the largest ever conducted by a university in terms of the volume of oil released and the scale.

“The data we obtained, which has not been published yet, is being used by other researchers to calibrate their models.”

The team expects to come away from these experiments with insights they can apply to a variety of ocean-based oil releases. Boufadel said:

“Rather than limiting ourselves to a forensic investigation of the Deepwater Horizon release, we are using that spill to explore spill scenarios more generally.

“Our goal is not to prepare for the previous spill, but to broaden the horizons to explore various scenarios.”

More than nine years after the Deepwater Horizon drilling rig exploded, sending up to 900,000 tons of oil and natural gas into the Gulf of Mexico, there are, however, lingering questions about the safety and effectiveness of a key element of the emergency response — injecting chemicals a mile below the ocean surface to break up oil spewing from the ruptured sub-sea wellhead to prevent it from reaching environmentally sensitive regions.

To date, spill cleanups have focused primarily on removing or dispersing oil on the ocean surface and shoreline, habitats deemed more important ecologically. Knowledge of the deep ocean is in general far murkier, and at the time of the accident, BP’s drilling operation was the deepest in the world.

Two years ago, Boufadel and collaborators from the Woods Hole Oceanographic Institution, New Jersey Institute of Technology, Texas A&M University, and the Swiss Federal Institute of Aquatic Science and Technology pooled their scientific and technical expertise to provide some of the first answers to these controversial policy questions.

The team began by developing physical models and computer simulations to determine the course the oil and gas took following the eruption, including the fraction of larger, more buoyant droplets that floated to the surface and the amount of smaller droplets entrapped deep below it due to sea stratification and currents.

Boufadel and Lin Zhao, a postdoctoral researcher in the CNR, developed a model that predicted the size of droplets and gas bubbles emanating from the wellhead during the sub-surface blowout; they then factored in water pressure, temperature and oil properties into the model, and employed it to analyze the effects of the injected dispersants on this stream, Zhao noted:

“Among other tests of our model, we studied the hydrodynamics of various plumes of oil jetting into different wave tanks.”

Researchers at Texas A&M in turn created a model to study the movement of pollutants away from the wellhead. The researchers determined that the use of dispersants had a substantial impact on air quality in the region of the spill by reducing the amount of toxic compounds such as benzene that reached the surface of the ocean, thus protecting emergency workers on the scene from the full brunt of the pollution.

Their study was published in PNAS. Christopher Reddy, a senior scientist at Woods Hole Oceanographic Institution, and Samuel Arey, a senior researcher at the Swiss Federal Institute of Aquatic Science and Technology, wrote in Oceanus magazine:

“Government and industry responders were faced with an oil spill of unprecedented size and sea depth, pitting them in a high-stakes battle against big unknowns.”

“Environmental risks posed by deep-sea petroleum releases are difficult to predict and assess due to the lack of prior investigations.

“There is also a larger debate about the impact of chemical dispersants. There is a school of thought that says all of the oil should be removed mechanically.”

Boufadel added that the water-soluble and volatile compounds that did not reach the surface were entrapped in a water mass that formed a stable intrusion at 900 to 1,300 meters below the surface. Reddy and Arey said:

“These predictions depend on local weather conditions that can vary from day to day. However, we predict that clean-up delays would have been much more frequent if subsurface dispersant injection had not been applied.

“But this is not the final say on the usage of dispersants.”

The current experiment is an attempt to provide more definitive answers.

Provided by: Tracey Regan, New Jersey Institute of Technology  [Note: Materials may be edited for content and length.]