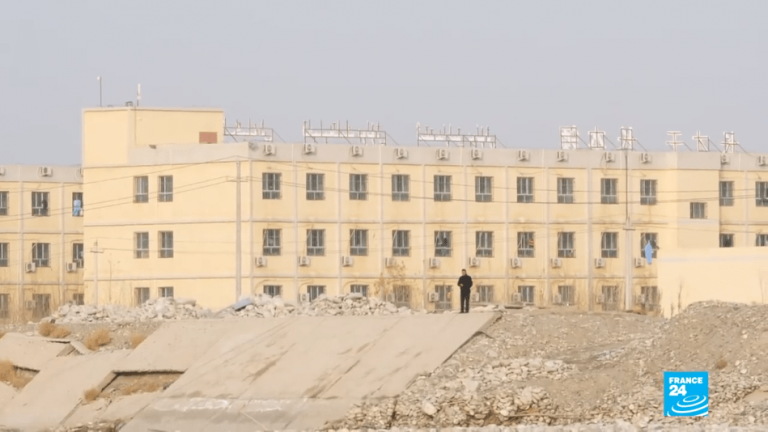 Beijing has continually denied that the Uyghur camps it runs in Xinjiang have anything to do with violating the human rights of religious minorities in China. (Image: Screenshot / YouTube)

Beijing has continually denied that the Uyghur camps it runs in Xinjiang have anything to do with violating the human rights of religious minorities in China. However, a recent video report by the BBC shows the frightening conditions of such camps.

In the video,the reporter is shown exploring a camp where the inmates are painting, singing, and learning Mandarin. But even though the inmates are smiling, one can easily pick up that these are fake smiles. It seems like they are just following orders. A former detainee at a similar camp confirms the suspicion when she explains that the inmates are often threatened with severe punishment should they appear sad or complain about life in the camps when someone comes to do an interview.

Interestingly, a comparison of the camp’s satellite imagery shows that the authorities made massive changes to the camp before the reporters visited it. A huge fence and a few watchtowers that were previously present were removed. An empty space was converted into a basketball court. When the reporters came in, the inmates were playing basketball as if desperate to show that they were “having fun.” The reporters were barred from entering any non-approved area of the camp.

At a recent UN Human Rights Council meeting, China defended these camps by saying that they are required to root out extremists. “By setting up vocational education and training centres in accordance with the law, we aim to educate and save those who were influenced by religious extremism and committed minor legal offences… This will prevent them from becoming victims of terrorism and extremism and to protect the basic human rights of the citizens from infringement,” Erkin Tuniyaz, Xinjiang vice-governor, said in a statement (South China Morning Post).

The treatment of Uyghurs has been condemned by the U.S. government and lawmakers time and time again. The Trump administration has also initiated several steps to put pressure on Beijing to stop persecuting religious minorities. However, these attempts have not produced the desired effect and the Chinese government continues to put millions of Uyghur, Kazhak, and Hui Muslims, along with Falun Gong practitioners and Catholics, into “re-education” camps. Secretary of State Mike Pompeo recently slammed China for its “staggering religious abuses.”

“The Chinese Communist Party has exhibited extreme hostility to all religious faiths since its founding… In China, the intense persecution of many faiths — Falun Gong practitioners, Christians, and Tibetan Buddhism among them — is the norm… History will not be silent about these abuses — but only if voices of liberty like ours record it,” Pompeo said in a statement (The Epoch Times).

A famous Uyghur writer, Nurmuhammad Tohti, has passed away after being held in captivity at a Xinjiang camp. The 70-year-old Tohti was detained between November 2018 and March 2019. During his time in the camp, the author was denied treatment for heart disease and diabetes. This is believed to have worsened Tohti’s health, eventually leading to his death.

“His name was Nurmuhemmet Tohti and he was a respected writer; no affiliation with terrorism, which is what the Chinese government claims these concentration camps are fighting against. He deserved better, and so do the MILLIONS of Uyghurs who are suffering in these camps rights now… my grandfather was murdered by the Chinese government,” Babur Ilchi, Tohti’s grandson, said in a statement (Radio Free Asia).

When Ilchi found out about Tohti’s death, he called his grandmother to confirm it. After the call, his grandmother was contacted by the Chinese authorities who warned her that answering a foreign call was a “dangerous” decision.