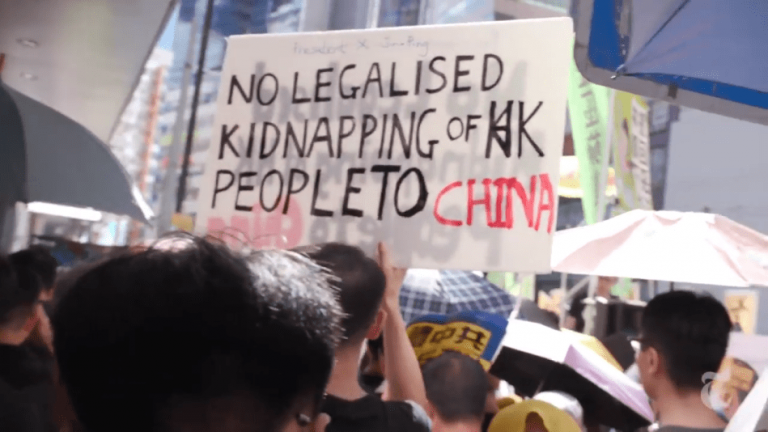 Even though the Hong Kong protests have been a much-covered subject throughout international media, most people in mainland China continue to remain unaware of what is happening in the city. (Image: Screenshot / YouTube)

Even though the Hong Kong protests have been a much-covered subject throughout international media, most people in mainland China continue to remain unaware of what is happening in the city. This is because Beijing is censoring any discussion about the topic on online platforms.

In China, if people were to search for “Hong Kong” online, they would only get results that portray the city’s protests as riots instigated by the U.S. government. However, much of the news about the city will not even be about the protests. Instead, it’s about weddings, stock markets, celebrity gossip, and so on. “Some people, including me, were silenced, while the rest were excited to talk about celebrities smoking, getting married, getting divorced, or cheating, pretending that all these topics are really worth discussing… The truth is that these are the only topics that are allowed to be discussed,” a popular blogger said in a statement (The Bakersfield Californian)

One method that Beijing uses to keep people from finding out news about the Hong Kong protests is keyword censoring. Any article, image, or video containing words like “Hong Kong,” “democracy,” “no extradition bill,” etc., are removed immediately by the state through automated systems. In addition, thousands of people are employed by the state to manually identify posts that computers might miss. People who send messages about the events in Hong Kong through WeChat soon find that they are deleted.

In some cases, the censors allow the post to remain in the poster’s account while preventing other users from seeing it. As such, the person who posts content about the Hong Kong protests ends up believing that they have somehow managed to evade the censors, when in reality, they are the ones deceived. But despite the efforts of state censors, details about the Hong Kong protests are spreading in Chinese cities through word of mouth. Many admire Hongkongers, saying that they have the courage to stand up to Beijing. However, some people do not care what happens in the city since they feel Hongkongers are “haughty.”

“I think young people in Shenzhen aren’t that interested in the protests in Hong Kong because of our own prejudices… We think Hong Kongers are British lackeys who are arrogant and see themselves as better than us… We’ve also grown up in different political systems. China has always been authoritarian whereas Hong Kong hasn’t been. Plus, we don’t even use the same social media platforms — that makes it hard to communicate,” a 24-year-old student said to Financial Times.

Leading up to the G20 meeting, Hong Kong protestors asked countries who would be attending to put pressure on Chinese President Xi Jinping and force Beijing to stop intervening in the affairs of the city. Hundreds of demonstrators marched to the consulates of the UK, Japan, and the U.S. asking that the leaders back Hongkongers’ demand for withdrawing the extradition bill.

“As world leaders meet at the G-20 Summit, Hong Kong citizens now urge all of you, including Xi Jinping, to answer our humble questions: Does Hong Kong deserve democracy? Should Hong Kong people enjoy democracy?” the Civil Human Rights Front said in a statement (The Washington Post).

HK Chief Executive Carrie Lam previously announced the suspension of the extradition bill. Since it has not been withdrawn, many protestors are suspicious that the government might try passing the bill on some future date.