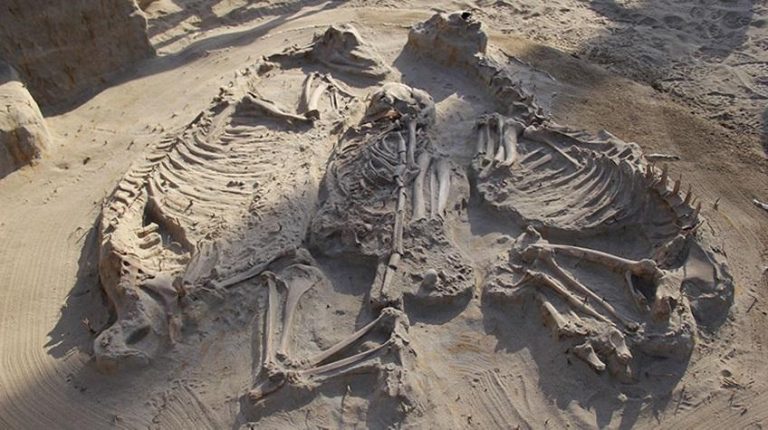 Archaeologists learn about the past by piecing together artifacts from material culture: The tools, artwork and architecture left behind that tell us how ancient humans lived. But imagine being able to study their ancient DNA as well to learn about how different groups of people were related to each other, where they came from, or even what kinds of diseases they had?

The concept of recovering DNA from ancient bones, especially those of humans and our evolutionary relatives, is still relatively new. Researchers can study the genome of modern-day populations of humans and extrapolate things about the past by comparing them to genomes of other groups.

For example, if the genome of one group differs from a closely related group by a certain percentage, scientists could work backward to calculate how long ago the two groups split, knowing the average amount of time it takes mutations, or random changes to genes, to accumulate.

But this approach requires making a lot of assumptions about the rate of genetic change and how these groups actually lived and interacted with each other. Maanasa Raghavan, Ph.D., a geneticist who recently joined the faculty at the University of Chicago to build an ancient DNA lab, wants to refine some of these assumptions and models by going straight to the source, saying:

“Now we have the tools by which we can actually extract and sequence entire genomes directly from the skeletal remains of ancient individuals.

“It’s like a time capsule from when these people lived. Suddenly we have an anchoring point in the past, so you don’t have to assume things anymore.”

Being able to sequence ancient DNA provides a snapshot of those people at a specific point in time. Extracting this DNA starts by finding the right kinds of bones, like teeth or the small, dense bones of the inner ear (petrous bone), that preserve enough DNA inside.

Researchers then grind a section or drill into the bone and prepare the resulting powder for DNA extraction and sequencing. It’s a delicate, carefully-controlled process: Raghavan’s new lab is located in the sub-basement of the Gordon Center for Integrative Science, purposefully separated from other genetic labs to avoid contaminating the samples with modern DNA.

There are several ancient DNA labs around the world now, and the more samples Raghavan and her colleagues can analyze in an ethical, informed, and sustainable manner, the higher resolution picture they can create about how individuals and populations evolved over time.

They can then layer in what we know from other fields like anthropology, archaeology, linguistics, and ecology to see what effects cultural practices, population movements and mixing, and changes in the environment had on human genetic history.

For example, one of Raghavan’s first projects is to analyze ancient DNA samples from South Asia. This work is being done in close collaboration with Indian researchers and archaeologists. The region has been understudied because DNA generally doesn’t preserve well in tropical environments.

But as sampling and genetic sequencing tools have improved, researchers are able to find more and more usable ancient biological materials. South Asian cultures have a history of caste systems and intermarriage between close relatives, which leads to higher rates of diseases caused by mutations in recessive genes.

By studying ancient DNA from people who lived during different points in time, Raghavan and her team can compare the ancient genomic data to modern samples and infer how much intermarriage was happening in the past, and what effects it may have had on disease rates over time.

Raghavan’s group is also working on projects to reconstruct the human population history of the Americas. One region of focus is Chile, where members of the group will collaborate with Mauricio Moraga and Ricardo Verdugo from Universidad de Chile and archaeologist Paola González Carvajal.

The team will study ancient human DNA from past cultures to understand whether cultural evolution correlated with human genetics. For example, were new cultures accompanied by new people migrating into the region and bringing with them new lifestyles and technology? How did these various populations interact, if at all, and did they contribute genes to present-day populations who live in in this region of South America?

Raghavan says this kind of detective work helps build a better understanding of how present-day populations are structured. Certain populations of people form subgroups because people tend to marry and reproduce within the same groups or cultures.

Over time, this starts to create differences in the genome that may mean one of these groups is more prone to diseases (or protected from different diseases) than another. These fine distinctions can make a big difference in designing genome-wide association studies that compare different populations and look for genetic changes that might account for disease.

By looking into the past, Raghavan wants to take that a step further and learn where diseases come from. Again, applying lessons from other fields of human study, was there something about the environment that might have made ancient humans susceptible to diseases that remained with us? Or was there a dramatic change in their lifestyle? Raghavan said:

“With the ability to get DNA from the past we can actually start directly looking at changes in the genome over time and correlating them with environmental or lifestyle changes in the past.

“We can start better piecing together not just how humans evolved but how they evolved within the environment they lived in at a particular time period and how that impacted the history of disease in our species.”

Provided by: Matt Wood, University of Chicago [Note: Materials may be edited for content and length.]