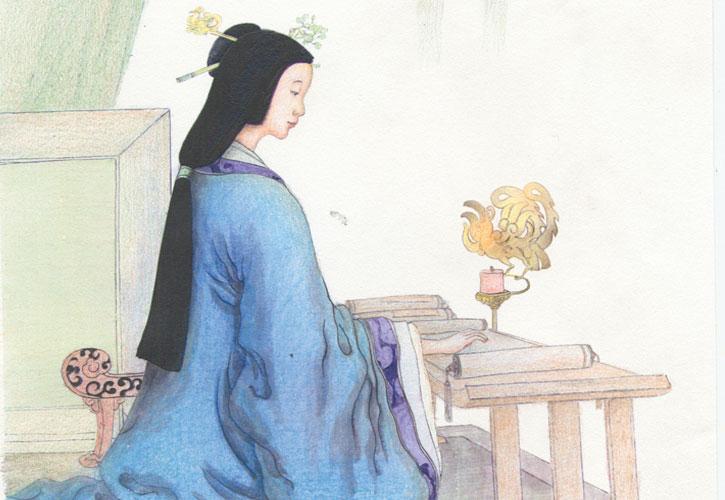 Ma Mingde, third daughter of a famous Han Dynasty general, became empress when she was 21 years old. (Image: via Taste of Life)

Ma Mingde’s demeanor led her to become Empress Ma. The third daughter of the famous Han Dynasty General Ma Yuan, Ma Mingde was only 13 years old at the time of her father’s death and her mother’s mental instability, but she bravely stepped forward to take care of the entire family. She was not only able to deal with major and minor things in the household, she also ably represented the family like an adult during difficult times.

In A.D. 52, at the age of 13, she was selected to join the court of Liu Zhuang, the crown prince. She treated everyone around her with a great deal of respect and courtesy, gradually becoming beloved by all. In A.D. 60, he was about to select his empress and asked his mother, Empress Dowager Yin, for advice. Empress Dowager Yin replied: “Royal Lady Ma, the most virtuous among all your wives, should be your choice.” And thus she became Empress Ma Mingde (Ming means “clear” and de means “virtue.”)

Empress Ma was not only virtuous, she was also learned. She could recite the Book of Changes in its entirety and was very familiar with many classical Confucian texts. She went on to become a writer herself.

Empress Ma was modest, frugal, and didn’t pursue pleasure or comfort. She was kind to everybody. Other than formal state occasions, she never wore expensive silk clothing but plain cotton instead. Other wives of the emperor respected and admired her.

Empress Ma had many virtues and talents

She was a woman blessed with many virtues and talents, as well as good looks. Even though she didn’t want to interfere in the affairs of the country, she stepped in on rare occasions when her conscience was compelled. With a few words and a single look on the face of Ma Mingde, a major case that could have resulted in the wrongful deaths of many innocent people was quickly put to an end. Liu Zhuang was normally a very strict emperor. Empress Ma was given a great deal of credit for the quick and benevolent closure of the case.

From then on, Emperor Liu Zhuang knew that his empress possessed unique and insightful political understandings. She had the ability to take many different things into consideration. He began to turn to her for advice. She came through with insightful analysis and constructive solutions, directly contributing to improvements in the country’s affairs. Despite receiving recognition from the emperor, Empress Ma never once tried to promote her own family members.

Empress Ma devoted herself to caring for a baby that was not her own. She refused help from the servants and wore herself out looking after his every need. The amount of care and motherly love that she gave to the boy as he grew up surpassed what other royal wives gave to their own natural children. Empress Ma and the child, Liu Dan, grew very close.

In A.D. 75, Emperor Liu Zhuang died. Liu Dan, the crown prince, ascended to the throne. He named Empress Ma the Empress Dowager. He knew that Empress Ma wasn’t his birth mother, but he also knew how much love she had given him over the years and treated her as his own mother in his heart.

Liu Dan wanted to honor the Empress Dowager’s brothers with the title of Marquis, but she wrote an edict that forbade it, saying: “The Ma family hasn’t made any contribution to the country. Right now, there is a major drought and our people are suffering. If you must honor them, wait until the weather is good and our border is calm.”

Four years after Liu Dan ascended the throne, the country enjoyed great weather and an excellent harvest. The border became calm. The Emperor then bestowed Empress Dowager Ma’s three brothers with the title of Marquis.

After she learned about it, the wise woman again warded off greedy behavior by warning her brothers not to exert untoward influence at the royal court. After they accepted the title of Marquis, they resigned from their official posts and stopped participating in the country’s political affairs.

During the Eastern Han Dynasty, many emperors died young, leaving behind child sons to inherit the throne. Most of the young Empress Dowagers relied on their own families to run the country, resulting in many tragedies. Empress Dowager Ma was the only exception. She learned from history and forbade her family from holding too much power. She lived her entire life in a modest, low-key, and frugal way. She was a very learned person and possessed a sharp mind. She died in A.D. 79 at the age of 41.