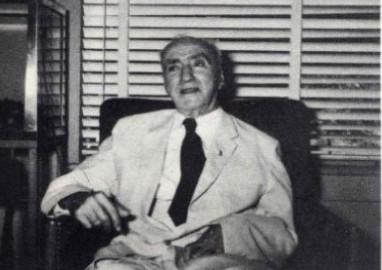 After the Chinese communists ousted Chiang Kai-shek’s National Government, Ambassador Stuart returned to the U.S. where he visited U.S. Senators and encouraged them to advise the Truman administration to help salvage the situation in China. He returned to the Presbyterian Church to deliver a public speech. In his speech, he mentioned China’s internal and external problems and unfavorable international situation in recent decades. He proposed that the United States not push the responsibility of the collapse of the Republic of China onto the Chinese themselves and stay out of it.

He also defended General Chiang Kai-shek because, from his own observation, he believed that Chiang Kai-shek was a leader with great moral cultivation who had made every effort to resolve the situation. Stuart believed that all walks of life in the United States were affected by the propaganda of the Communist Party at that time and people failed to see the true nature of the Chinese Communist Party. As a result, China was seized by the communist regime. What he believed should be done now was to fully support the government of the Republic of China in Taiwan. However, after a few speeches, Stuart was banned from speaking publicly by the Truman administration.

At the beginning of December 1949, on the way back to Washington, Stuart, then aged 73, was sent to the hospital for emergency treatment after feeling unwell. He was diagnosed with severe cerebral thrombosis, lost his language ability, and became paralyzed due to the stroke. Stuart resigned from being the ambassador due to his ill health.

Stuart worked almost all his life in China. In the United States, he had no personal property or even social security. Even the $1,000 a month salary during his tenure as ambassador had mostly been donated to the development of education in China. In his later years, he lived in poverty. Fortunately, he was able to rely on his private secretary, Fu Yibo, and his family members, who cared for him as he regained his health. In the last few years of his life, to leave his legacy to history, he started working on a book titled Fifty Years in China — The Memoirs of John Leighton Stuart, Missionary and Ambassador, which also contained a section titled: “United States and China: What policy now?”

In his book, he mentioned the nature and purpose of communism and the characteristics of the Chinese people. He talked about the spirit and purpose of the founding of the United States from a historical point of view and how the nation was shouldering the mission of God to be a model of the free world, and how it must not make any favorable actions towards communist groups. According to him, the urgent task of the United States was to defend Taiwan and not let it fall under the control of the Communist Party:

“I am nearly eighty years old. I have seen that there is a great war in this world that is still going on. This war has an important impact on everyone, every country, and even all mankind: that is, do we want to insist on atheism, communism without soul and centralization conquers and controls the world.

Communism is a system of demons that denies the existence of God and denies that people have souls. They declare that everything is material, and all actions are materialistic. They force all human beings to accept them and use force and deception to achieve their goals. Communism is to devour everything to achieve its own survival. Its desire is never satisfied. Neither kindness nor warmth can change its attitude. For this demon disturbs the world, we must do our best to stop it…

On September 19, 1962, Stuart died in Washington at the age of 86. In his will, he hoped to be buried on the campus of Yanjing University. However, the application process was blocked. Some people objected to the burial in China on the grounds that Stuart was criticized by Mao Zedong, the former leader of the Chinese Communist Party. The matter was therefore put on hold until it was finally approved at the end of 2008. On November 18, Stuart’s ashes were officially buried in Hangzhou, and his last wish was finally fulfilled.

There are only simple ornaments on his tombstone; his epitaph reads — Stuart, the president of Yanjing University, and a photo of his smiling face, which seems to echo his speech and the final paragraphs of the memoirs:

“I know that on the mainland of China, there are also many things that the Communist Party cannot destroy or allow it to destroy. There is still a lot of light shining on the land that is covered by darkness. It is the light of faith, the light of courage, and the light of freedom shining that never goes out. Many Chinese in Taiwan and overseas have the same light. I believe that one day the Chinese nation will rekindle the torch of democracy, freedom, and justice.

Finally, I would like to mention the past motto of the establishment of Yanjing University in China: ‘Freedom Through Truth For Service’..This is a famous saying from the Bible. We must understand the truth and be free in the process of pursuing the truth. I am getting old, but I have always believed that the more people have faith, the more progress there will be in the world, and the happier the life of mankind. I will stick to this philosophy and belief throughout my life. Even if the situation is chaotic, I have always believed that behind this chaos, there is an unknown powerful force that cares for me, and God loves us forever.”

Part I can be found here