When a Powerful Few Control the Many: Monopolies in the American Economy 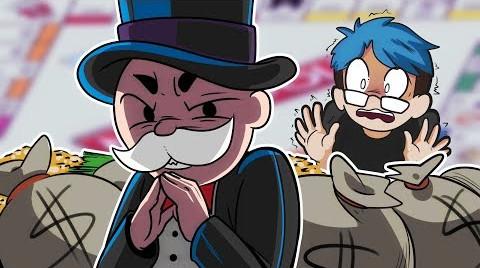 A monopoly forms when a seller or group of sellers act jointly to control a market. (Image: Screenshot / YouTube)

A monopoly is an economic situation in which a seller, or group of sellers, acts jointly to control markets. In the U.S., three corporations control nearly 80 percent of the mobile telecommunication market, four control almost 85 percent of U.S. corn seed sales, three firms exercise control over 95 percent of credit cards issued, and just 6 corporations have control over 90 percent of the American media. This kind of concentrated control of markets by just one or even just a few players is very harmful to any market, including those found in the strongest of economies, like the United States.

“Normally, companies grow their profits by delivering better products at lower prices than their competitors. It is a dynamic process with competitors constantly dropping out and new ones appearing. Joseph Schumpeter called this “creative destruction,” which sounds harsh, but it’s absolutely necessary for economic growth. Today, the creative destruction isn’t happening. And as companies refuse to die and monopolies refuse to improve, we struggle to generate even mild economic growth,” according to Forbes.

One famous example of a monopoly that has been deemed harmful in the U.S. is that of Amazon. When the company launched in 1995, it was considered revolutionary and a boon to the market. But today, Amazon is accused of being responsible for shutting down a large number of retail chains like Musicland, Circuit City, Tower Records, Borders, and so on. Retail networks that are believed to be at risk of shutting down due to Amazon’s growing power include Macy’s, Barnes & Noble, Target, Bed Bath & Beyond, etc.

“It started by taking a dominant position in bookstores, publishing, and distribution before infiltrating cleaning supplies, electronics, and home goods. Now it is beginning to dominate all forms of retail as well as cloud services, electronic gadgetry, and small-business lending,” according to Venture Beat. U.S. President Donald Trump has been critical of Amazon and has insisted that antitrust claims be brought against the e-commerce platform.

In India, the government seems to have understood the dangers posed by monopolies like Amazon and has passed new e-commerce laws that severely restrict the company’s ability to leverage its online platform and huge cash reserves to dominate markets and eliminate competition. Italy’s competition authority is investigating whether Amazon is abusing its dominant position in e-commerce by granting vendors who participate in its logistics service an advantage over those who do not use such services.

In the tech industry, monopolies are the norm. Google literally controls the entire online search market, while Facebook enjoys huge dominance in online communication. The monopolies of the tech industry have been a hotly debated topic, as many now recognize that a few have control over many and that they decide the flow of information, giving them the ability to determine what narrative builds in society. Last year, Facebook CEO Mark Zuckerberg was called in to testify in front of the European Parliament.

“Zuckerberg answers the monopoly question in part by saying that Facebook advertising helps small businesses grow. That essentially Facebook is helping its potential future competitors by making it easy for them to buy advertising… He also gave the same stat he gave Congress, that the average person has 8 apps they use to communicate with friends and family. Neglects to mention how many of them are owned by Facebook,” Sarah Frier, tech reporter for Bloomberg, said in a series of tweets.

In a congressional hearing, Zuckerberg admitted that Silicon Valley had a leftist culture that made many employees have anti-conservative views. Several conservative channels on online platforms like YouTube, Twitter, Facebook, etc., have accused the tech giants of unfairly banning them just because their views did not match up with liberal ideologies.