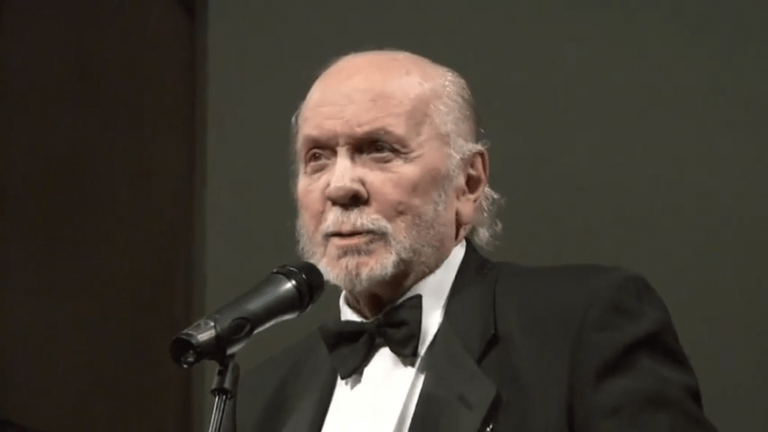 Lyricist Herbert Kretzmer, OBE, was moved by the Hong Kong protesters singing his song 'Do You Hear the People Sing?' while marching to call on the government for freedom and democracy. (Image: Screenshot / YouTube)

The Hong Kong government’s proposed extradition bill caused more than 2 million Hong Kong people to protest in the streets on June 16. Protesters sang Do You Hear the People Sing? while marching to call on the government for freedom and democracy.

The scene moved 93-year-old lyricist Herbert Kretzmer, OBE, as he watched the protesters on television from his home in West London. He wrote an article on June 19 for Daily Mail to express his thoughts.

With Communist China’s backdoor order, the Hong Kong government proposed and proceeded with the reading of the extradition bill in such a rush that Hong Kong people were angered. The June 9 protest saw 1.3 million marchers take to the streets. A week later, 2 million protesters turned out in the June 16 protest demanding that the bill be withdrawn and that an investigation be opened to look into police abuse of power and violence. The scene of packed crowds in black singing the song Do You Hear the People Sing? from the musical Les Misérables with such passion and gusto shocked and amazed the world.

Kretzmer wrote in his article: “As I watched them on television from my home in West London, I felt a lump rise to my throat. Not only because I admired their bravery in standing up to Communist China… but because the words they were singing were words I had written 33 years ago — and I knew the song in question had been banned in China.”

Born in South Africa in 1922, Kretzmer relocated to London in the mid-1950s.  Describing himself as “a journalist all my life and sometime songwriter,” he wrote the lyrics to Do You Hear the People Sing? 33 years ago when Cameron MacKintosh asked him to adapt the libretto of a French musical, Les Misérables. It was at a time when Nelson Mandela was still in prison and the Berlin Wall was still in place.

Herbert Kretzmer rewrote the lyrics to link the idea of liberty and democracy with the song title itself: Do You Hear the People Sing?. “My song sought to demonstrate the power of words when set to inspirational music — a power that can mobilize millions, silence guns, and lay down weapons… but I never imagined it might become an anthem for protesters everywhere, from Venezuela to Taiwan, Turkey, and Hong Kong.”

Herbert ended his article with these encouraging lines: “Do you hear the people of Hong Kong? They are standing up for their rights. At 93, I can only be with them in spirit. But my words are on their lips — and I am singing with them, too.”