The Ancient Crocodile That Preyed on Dinosaurs 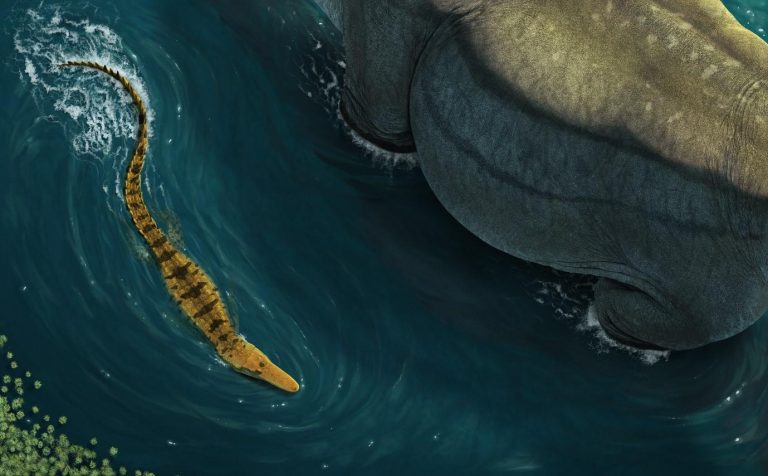 Two fossils, one found more than a century ago and another collected 70 years later, were the clues that enabled a Masters student to identify a new species of prehistoric crocodile.

The new species of crocodile has been described from opalized fossils found at Lightning Ridge in NSW, Australia, from a fossil dug up more than a century ago and a second one found more than 70 years later.

Dating back 100 million years, the new species, Isisfordia molnari, is one of the oldest known direct ancestors of today’s living crocodiles. The species was named after Ralph Molnar, a paleontologist whose many valuable contributions to Australian science include research on fossil crocodiles.

This is the second species of Isisfordia discovered, with Isisfordia duncani named in 2006 from fossils found near the Queensland outback town of Isisford. Isisfordia molnari grew to between 1.5 and 2 meters in length and is thought to have been a semi-aquatic ambush predator, like modern crocodiles.

Its prey probably included small dinosaurs such as Weewarrasaurus. Lead researcher Lachlan Hart, a Master of Science student at the University of New England in Armidale, explained how the new species was discovered. Mr. Hart said:

“The first crocodile fossil from Lightning Ridge, a partial jaw bone with teeth, was discovered in 1917, at a time when little was known about fossil crocodiles from the Australia’s age of dinosaurs.”

“It found its way to the Australian Museum and was given a name that turned out to be incorrect. Then in the early 2000s, opal buyers Peter and Lisa Carroll found a piece of fossil crocodile braincase (the rear section of the skull) from Lightning Ridge and sold it to the Australian Museum; but still there were so few Australian crocodile fossils known of this age, scientists also found this new piece difficult to interpret.”

“After Isisfordia duncani was discovered in Queensland in 2006, it allowed us to make more sense of the earlier Lightning Ridge discoveries. Although they were similar, we found several differences which set the Lightning Ridge species apart.”

Like other fossils from Lightning Ridge, the Isisfordia molnari fossils are opalized, meaning that the original bone and tooth material has been replaced by opal.

Other famous opalized fossils from Lightning Ridge include those of the recently-announced herbivorous dinosaurs Fostoria dhimbangunmal and Weewarrasaurus pobeni, fossils of which are at the Australian Opal Centre, a public museum that earlier in 2019 secured $20 million to construct a new building at Lightning Ridge for its world-leading collections and programs.

“Lightning Ridge is one of the most important fossil sites in Australia.

“This new research is adding to a complex and intriguing picture not only of the dinosaurs of the time, but the animals and plants they lived with and the ecosystems they were part of.”