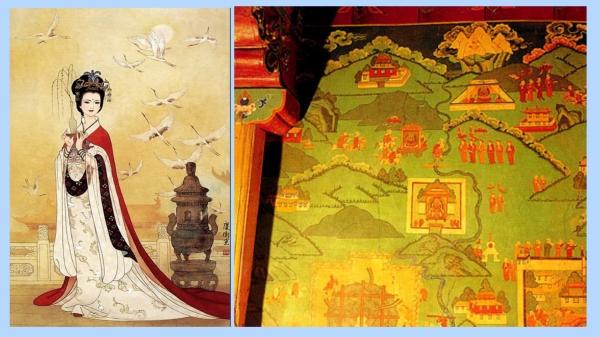 Princess Wencheng was sent by China’s Emperor Taizong to Tubo, now known as Tibet, to marry the ruler, Songtsan Gambo, and ensure peace between the two kingdoms. (Image: via Secret China)

While the royal couple settled in, Princess Wencheng’s attendants followed Emperor Taizong’s instructions to assist the Tibetan kingdom economically and impart the culture and etiquette of China to the locals.

One of the traditional customs practiced by the ancient Tibetans was the daily use of ochre soil to coat their cheeks, as this was thought to ward off evil spirits. Princess Wencheng carefully examined the practice and found that it was unhygienic and damaged the skin. She politely offered her opinion to Songtsan Gambo, who, after listening to her, found her advice very reasonable and had the custom abolished. Though it took his subjects some time to part with this custom, they came to discover the benefits of discarding it.

Similarly, the Han scribes aided the Tibetans by sorting their native literature. They recorded the important conversations held between Songtsan and his ministers, formalizing the political process from its previous colloquial state. The king directed Tibetan officials and noblemen to learn from Chinese literature, and sent aristocratic children to study in Chang’an so that they could bring back more knowledge to Tibet.

The Chinese guests also brought great advances to the common Tibetan people. With their grain seeds that they had brought with them from the Chinese central plains, they planted them in the fertile soil of the Tibetan plateau. The agricultural technicians introduced tried and tested farming techniques common in China, meticulously irrigating, fertilizing, and weeding the new crops. The Tibetans, who traditionally lived a nomadic life, were surprised and awed by the high yields, and learned from the experts to spread their techniques to communities throughout the kingdom. The Chinese also taught them to plant mulberry trees so that they could raise silkworms and use them to create the same elegant clothes worn in the Tang empire.

Princess Wencheng made careful observations of popular sentiment in Tibet, which she used to offer advice to her husband and aid him in his governance. During major political decisions, she only put forward her own views and did not try to interfere. Hence, Songtsan Gambo and the ministers often asked her about the political system of the Tang court as a reference for their administration.

Along with Songstan Gampo’s other wife, who came from Nepal, Princess Wencheng helped spread Buddhism to Tibet. The two queens are worshipped as bodhisattvas in Tibetan Buddhism.

In the 23rd year of the Zhenguan era, Emperor Taizong died and was succeeded by his son Emperor Gaozong. He appointed Songtsan Gambo as commandant and named him King of the West Sea County (西海郡王). Tang Gaozong asked his special envoy to send a large quantity of gold and silver, enamel, poetry, and grain, along with particular ornaments and cosmetics to Princess Wencheng, as a reward for bringing harmony between Tang China and Tibet.

To express his grief, respect, and gratitude to the Chinese empire, Songtsan Gambo offered many different jewels to display at Taizong’s memorial. Tang Gaozong was very moved, so he promoted Songtsan again and sent him more than 3,000 exquisite dyed silk strips. The Tubo messenger journeyed to Chang’an and asked Gaozong for the techniques of winemaking, milling rice, papermaking, and ink production, a request that the emperor granted.

Due to Songtsan Gambo and Princess Wencheng’s efforts, Tibet achieved rapid development in the military, political, economic, cultural, and other fields. Their power grew to dominate the region, forming a protective barrier protecting the entire western Chinese frontier.

Late during Emperor Gaozong’s reign, Princess Wencheng died in Lhasa and was commemorated by the construction of a Tibetan temple. Many of the artisans who arrived with her were treated with similar courtesy, and buried near Wencheng’s tomb when they died.

Part One can be found here

Translated by Judy Yang and edited by Helen