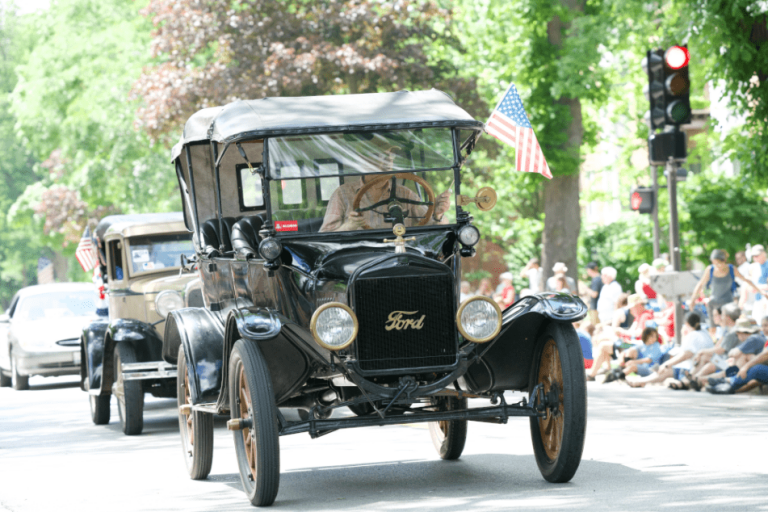 The Fourth of July is a time for family, fun, and fireworks. Communities all across America celebrate the day with fun-runs, 3-legged races, and pie eating contests. Another not-to-be-missed activity for many is the Independence Day parade. And Evanston, Illinois, located just north of Chicago, hosts a good one.

The parade in Evanston has been a tradition for almost 100 years. It was started by the North End Mother’s Club in 1922. After a child was injured setting off fireworks in 1921, the mothers got together to organize a day full of fun that would be safe and have supervised activities for the kids.

Locals have such enthusiasm for the parade that they mark out prime viewing spots along the route by setting up tarps, folding chairs, or lawn furniture well in advance. The Evanston City Council had to pass an ordinance in 2004 setting a limit on how early these reserved spots could be claimed. Now, instead of weeks in advance, people are only allowed to begin claiming spots at 6 a.m. on July 1.

This year’s parade theme, “A Salute to Community Volunteers,” was quite fitting. The parade itself can be held thanks to the all-volunteer Evanston 4th of July Association, which seeks out sponsors every year, ensuring that no taxpayer money is needed to fund it or the other activities they organize.

Chicago is a city of neighborhoods. Some people claim it has over 200 of them. Areas like Chinatown, Greektown, Little Italy, and the Mexican-American community of Pilsen are well-known, and this diversity could be seen in the parade’s entries.

The parade had just over 100 entrants, including the Evanston Escola de Samba, winner of the 2018 President’s Cup for the best overall group. This crowd favorite performed Brazilian music and danced along the parade route. This year marked their 10th appearance in the parade. Matthew Rarey, a drummer with the group, told The Daily Northwestern: “It’s really necessary that (on) the Fourth of July we can celebrate the multiple lines of cultural influence to this country.”

It has been 243 years since representatives from the original 13 colonies voted to declare their independence from Great Britain. The holiday serves not only as a celebration of freedom, but also as a reminder of the people who fought for it. Chicago resident, Dave Taub, put it this way: “It’s the beginning of our independence, and it’s really important and symbolic that we come out and celebrate it… I think about all of my relatives and ancestors, and I’ve got cousins overseas who are officers in the Army in Korea. I think of those guys, and hopefully they’ll be safe today.” (CBS)