Research Explains How Precision Cancer Drug Works and Who May Benefit 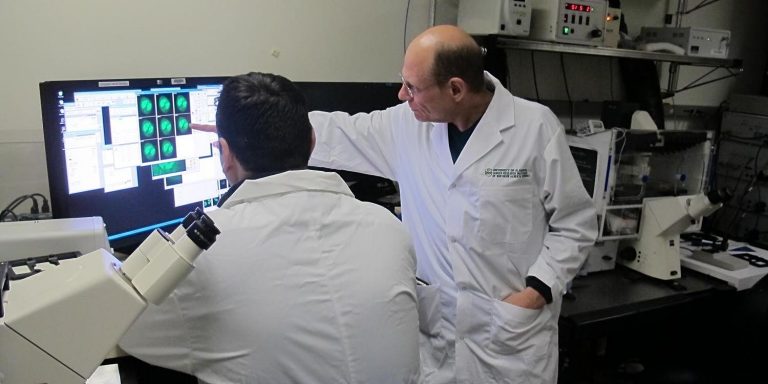 U of A oncologist and cell biologist Michael Hendzel (right) was part of a national research team that identified how a new class of cancer drugs known as PARP inhibitors work, opening the door to better targeted therapy for cancer patients. (Image: Faculty of Medicine & Dentistry)

New research that uncovers the mechanism behind the newest generation of cancer drugs is opening the door for better targeted therapy. PARP inhibitors are molecular targeted cancer drugs used to treat women with ovarian cancer who have the BRCA1 and BRCA2 gene mutations.

The drugs are showing promise in late-stage clinical trials for breast cancer, prostate cancer, and pancreatic cancer and are part of an approach known as precision medicine, which targets treatments based on genetic, environmental, and lifestyle factors. University of Alberta oncologist and cell biologist Michael Hendzel said:

“What we’ve done is identify how the drugs work.

“Knowing how they work will enable us to come up with new applications for them, so we can make this drug as useful as possible for as many patients as possible.”

People with the BRCA1 or BRCA2 gene mutation have a defect in their cells’ ability to repair double-strand breaks in the DNA, which puts them at increased risk of developing breast cancer. The PARP inhibitors take advantage of that weakness and further interfere with the proteins known as poly-ADP ribose polymerase (PARP1 and PARP2), which cells use to repair the daily damage to DNA that occurs normally.

When the cells can’t repair themselves, they die. Normal cells are unaffected. Hendzel, who is also lead researcher for the genomics stability research group at the Cancer Research Institute of Northern Alberta, explained:

“Cells often have redundancy, so, for example, if they have a defect in one way they use to repair damage, they can use a different way to do it.

“But when they have that defect, and you have a drug to interfere with the backup pathway, then you kill those cells.”

The research is the result of a 20-year collaboration between Hendzel’s research lab and the labs of Guy Poirier at Laval University’s Centre de recherche sur le cancer and Jean-Yves Masson of the CHU de Québec’s research center. PARP inhibitors are the first cancer therapies developed to exploit a process known as synthetic lethality, in which cancers with specific mutations are many times more sensitive to the drug than normal cancer cells.

Poirier said that 1 percent of all cancer clinical trials now involve PARP inhibitors and they could be the key to treating some intractable, aggressive cancers.

“PARP inhibitors work for cancers where no other treatment shows promise, such as metastatic pancreatic cancers and castration-resistant prostate cancer.”

Until now, it was not understood how PARP inhibitors work to interfere with cell repair. The new research reveals that PARP proteins regulate double-strand repair in the DNA, and the inhibitors prevent the control of the process that digests away one strand of DNA so it can be matched up with a copy that is used to repair it.

In previous research, Hendzel, Poirier, and Masson were the first to establish that PARP played a role in double-strand break repair. Their new results explain many effects of PARP inhibition that were not previously understood.

The new study shows there is additional potential to develop and improve existing combination cancer treatments where radiation or chemotherapy, which damages DNA, is combined with drugs that target PARP. The results predict what properties a cancer must have in order for PARP inhibition to improve therapeutic effectiveness in combination therapy.

“Our work explains why PARP inhibitors and radiotherapy are a good combo.

“In fact, PARP inhibitors will increase sensitivity to radiation therapy in some patients.”

“In an era where we will commonly have complete genome sequences of human cancers, this study will enable the deployment of PARP inhibitors as a precision medicine in combination therapies.”

Provided by: GILLIAN RUTHERFORD, University of Alberta [Note: Materials may be edited for content and length.]