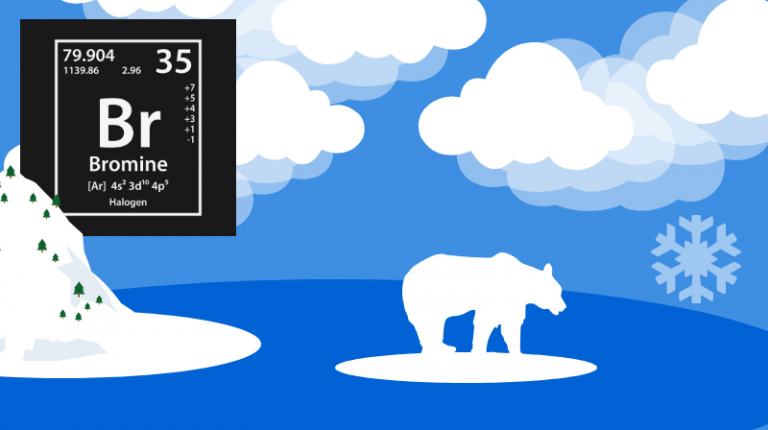 For the first time, researchers at the University of Michigan have detected bromine atoms in the atmosphere, and in doing so, have confirmed the reaction pathway through which mercury is removed from the atmosphere and enters the ecosystem in the springtime Arctic.

Mercury is a particularly toxic pollutant largely emitted through human activities such as coal-burning power plants. Because it’s long-lived — meaning it does not react with many compounds in the atmosphere — it collects in remote regions such as the Arctic, according to U-M chemist Kerri Pratt.

Mercury can be a serious public health hazard. When it enters the ecosystem, it accumulates in fish. The further up the food chain the fish is, the more mercury it accumulates. Researchers have long suspected that bromine reacts with ozone, a greenhouse gas, and mercury, but no one had measured bromine atoms in the atmosphere.

Senior author Pratt and her team, which includes first author Siyuan Wang, now an Advanced Study Program postdoctoral fellow at the National Center for Atmospheric Research, have published their results in the Proceedings of the National Academy of Science. Pratt, the Seyhan N. Ege Assistant Professor of Chemistry, said:

“Our findings have implications across the world.

“Even though this chemistry is most prevalent in the Arctic, the reactions with mercury occur in the upper troposphere of the tropics as well as other marine locations.

“The reaction of bromine atoms with ozone and mercury had been hypothesized for decades but no one had been able to actually measure this chemical species to confirm this is the chemistry that is happening.”

Bromine is so reactive and at such low levels that it is very difficult to measure in the atmosphere, according to Wang, who led the work as a postdoctoral fellow in the Pratt lab. Together with Pratt,  lab doctoral student Stephen McNamara spent a lot of time in the lab synthesizing bromine atoms at extremely low levels to prove their Arctic measurements. Wang said:

“With this new capability of measuring bromine atoms, we can improve our ability to predict mercury chemistry on a global scale.”

The researchers set up sampling instruments on the Arctic tundra. Air is sucked through a carefully designed inlet into a device called a chemical ionization mass spectrometer. The spectrometer measures the masses of the products in the sample, which tells the researchers what was in the air.

Bromine atoms are also difficult to measure because there are few places they exist on Earth, according to Wang. These places include above Arctic and Antarctic snowpacks and above the tropics in the upper troposphere — located about 8 miles above Earth, Wang added:

“With this new capability of measuring bromine atoms, we can improve our ability to predict mercury chemistry on a global scale.”

Researchers Daniel Obrist, then at the Desert Research Institute and now at the University of Massachusetts, Lowell; Christopher Moore, of the Desert Research Institute; and Ralf Staebler and Alexandra Steffen, of Environment and Climate Change Canada, made the mercury measurements. Additional researchers on the team included Angela Raso and Paul Shepson of Purdue University. Pratt ended with:

“It was really exciting to be able to measure these atoms given that this is chemistry that had been hypothesized, but unable to be measured, for several decades.”

Provided by: University of Michigan  [Note: Materials may be edited for content and length.]