Temples, Churches, and Other Architecture Inspired by the Divine 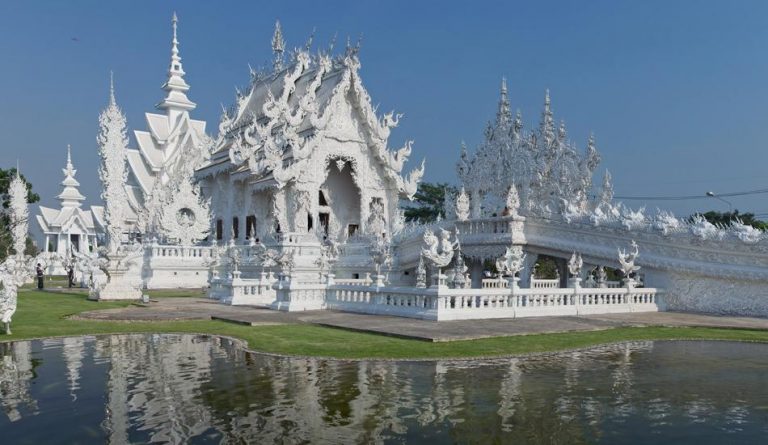 In all cultures, the most beautiful architectural structures tend to be religious ones, whether temples, mosques, or churches. It seems as if people are unconsciously driven to dedicate the best of their artistic efforts to the divine. Here are the top five most stunning religious structures from around the world.

Popularly known as the “White Temple,” the structure was designed and constructed by Thai visual artist Chalermchai Kositpipat, who also owns it. Opened to visitors in 1997, Wat Rong Khun is a Buddhist temple that blends religious principles with architecture. The main building is reached by crossing a bridge over a small lake, symbolizing the cycle of rebirth. The bridge declares that the only way to happiness is by giving up greed, desire, and temptations. Numerous dragons adorn the temple. From the outside, the entire structure seems to give off a glow.

This Lutheran church is located in Reykjavik, the capital city of Iceland. At 244 feet high, it is the largest church in the country. Initially, Hallgrimskirkja was not intended to be this big. But the church leaders wanted a spire so large that it would outshine the Landakot’s Church, a famous Catholic church in Iceland. The Hallgrimskirkja is named after famous Icelandic poet Hallgrimur Petursson. What catches people’s eyes is the beautiful organic structure of the church, which makes it seem as if the entire structure is somehow flowing out from the earth, up toward the sky. An elevator inside the church will take visitors all the way to the top, where they can gaze at the beauty of the surrounding mountains.

The island of Bali is home to some of the most breathtaking temples in the world. Among them, Pura Taman Ayun in Mengwi merits special mention. This is the second largest temple on the island and was originally the royal-tomb of the Mengwi kingdom. It was also the place where kings used to be crowned. While the first courtyard covers a large grassy expanse, the inner courtyard has several multi-layered shrines. The tall towers and pool full of lotuses transport visitors into the past. Built in 1634, the temple was renovated in the 1930s. Pura Taman Ayun is part of the rice field irrigation system sites recognized by UNESCO.

The Great Mosque of Djenne: Mali

Seen as one of the greatest accomplishments of Sudano-Sahelian architecture, the mosque is located on the floodplains of the Bani River. Originally built in the 13th century, the mosque was rebuilt in 1907. Unlike other structures that are typically constructed using bricks and tiles, what makes the Djenne mosque stand out is that it is completely built using red clay, tree branches, and blades of grass. However, the drawback is that the structure gets eroded every year due to rains. As such, the local community conducts an annual festival during which they take part in the repairs and maintenance of the mosque.

This Russian Orthodox Church is located on Kizhi Island on Lake Onega. Featuring two large wooden churches, the pogost was declared a UNESCO world heritage site in 1990. Built in the 17th century, not a single nail was used in the construction of the pogost, a feat that has baffled many people. Despite being three centuries old, the structure continues to remain strong, unaffected by rot.