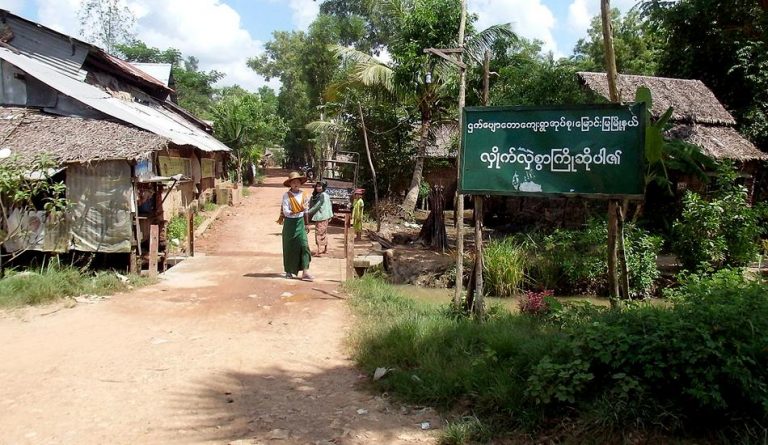 Four villagers from the Mandalay region in Myanmar have been sentenced to 14 months in prison with hard labor. (Image: mohigan via wikimedia CC BY-SA 3.0)

Four villagers from the Mandalay region in Myanmar have been sentenced to 14 months in prison with hard labor. Their crime — holding a protest in July 2018 against a Chinese company that was taking over their land in order to establish a cement plant.

The villagers have been convicted under Myanmar’s Roads and Bridges Law for blocking a road and preventing vehicles from traveling freely. “They didn’t let us testify in court. We were sentenced unfairly to 14 months in prison… We are local farmers, and the officials from Settlement and Land Records Department have testified that the lands belong to the farmers. And yet, we were sentenced unfairly,” a 60-year-old female defendant said to Radio Free Asia.

The Chinese company started testing soil samples in 2014 and purchased close to 600 acres of land from some of the residents in the region. The firm wanted to mine a nearby hill for raw materials and secured government permission for building a factory. When local villagers found out, they complained to the divisional government and the project eventually was put to a stop. But a year later, construction activities resumed and villagers started protesting against the company.

“The protests escalated last year when the Department of Road Transportation announced plans to expand the village road connecting the cement factory with the main road. Locals said they feared that the road expansion project would result in the seizure of their lands without any compensation, and opened the protest camp in their village in July 2018,” according to The Irrawaddy. The villagers are also worried the project might end up harming the environment. The company has already staked claim to some of the communal grazing lands.

Of the four villagers sentenced to the 14-month prison term, three of them have been detained at the Oh-Boe prison in Mandalay. A 70-year-old woman, who was out on bail, has yet to be found and has been branded a fugitive by the court. Her son died in jail last June after being arrested for protesting against the plant. The boy had several cuts and bruises, which the villagers claim to be the result of torture inflicted by authorities acting in the interests of the Chinese company. The woman may have run off, fearing that she would be dealt with in the same manner as her son if put in prison.

Beijing has tried to gain a strong influence in Myanmar. The country shares a southeastern border with India and would act as a good military base for China should any situation arise. But the leadership of Myanmar has dealt with China in a cautious manner, accepting investments and aid without becoming indebted.

However, the government realizes that it cannot keep China at bay in all matters and will have to compromise in some areas to secure investments. “Myanmar particularly worries about Chinese influence because of China’s size, power, and proximity, as well as the way China’s economic development projects have been carried out without due consideration for the well-being of Myanmar’s population and ecology,” according to USIP.

When Aung San Suu Kyi, the head of the Burmese government, attended a recent conference on China’s Belt and Road Initiative (BRI), President Xi Jinping apparently tried to assure her that China’s investments were not “debt traps.” But this had little effect on her and she did not give any assurance to Chinese authorities regarding the status of the Myitsone Dam Project, a project the Chinese are eager to get underway.