Keelung, a Charming City With Striking Features in Taiwan 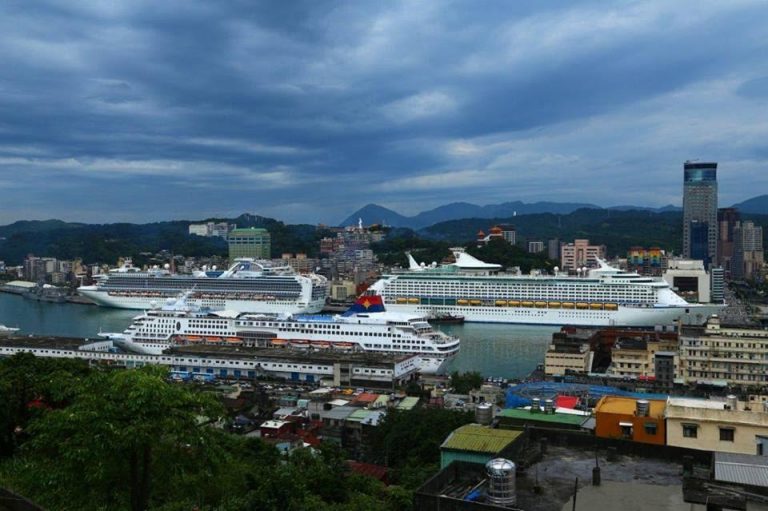 Keelung is a homeport of many famous cruise ships and a popular attraction. (Image: Courtesy of Wang Fu-tse)

Keelung is the northernmost city in Taiwan with an area of 132.76 km2 (51.26 mi2) and a population of 372,000. Though Keelung is a small city surrounded by the mountains on three sides and by the sea on the other side, it is a famous tourist destination with many striking features.

Please watch the following video of the charming Keelung City in northern Taiwan.

Among the tourist attractions in this city, Keelung Maritime Plaza is one of the most-visited locations. In front of Keelung Train Station and close to the famous Keelung Night Market, the spacious wooden platform offers a fantastic view of the Keelung harbor. It is also an excellent location to take in enormous cruise ships berthing in the harbor, to observe eagles circling and hovering over the harbor area, as well as enjoy the maritime ambiance with its refreshing sea air.

With a striking 25-meter high white statue of the Goddess of Mercy and a massive Main Salvation Altar (Zhuputan主普壇), Zhongzheng Park (中正公園) in the east of Keelung City is another great spot to have a bird’s eye view of the downtown area and the harbor.

When it comes to Keelung, the first thing that strikes most Taiwanese is the Keelung Night Market, also known as “Miao Kou Night Market (廟口夜市).” Situated in front of a temple in the center of downtown Keelung, the night market is arguably one of the best of its kind in Taiwan.

The night market is especially famous for its seafood, and among the iconic dishes are creamy butter crabs (奶油螃蟹), crab sticky rice(螃蟹油飯), squid soup (花枝焿), barbecue squid, and cuttlefish.

Observed on the 15th day of the seventh lunar month every year, the Keelung Ghost Festival (雞籠中元祭) is the most important event of the port city. It has been designated by the Taiwanese government as a part of Taiwan’s intangible cultural heritage and is one of 12 major festivals in Taiwan.

A wide variety of activities are held throughout the month to mark this Festival, and they culminate in a grand parade participated in by local clan associations and various public and civic organizations. With the themes of “legacy and harmony,” the 2019 Keelung Ghost Festival, hosted by Keelung City Hsu Family Association (許姓宗親會), will kick off on August 1, and the grand parade and release of water lanterns will be held on August 14.

The Main Salvation Altar in the Zhongzheng Park is decorated with colorful lighting around the Festival. It is lit up in the evening to symbolize the brightness of the world of the living, and to entice the roaming spirit to enjoy the sacriﬁcial oﬀerings during the ghost month.

As Keelung is an important habitat for eagles, it’s common to spot eagles soaring high in the sky or gliding over the waters of the harbor to catch their prey. Therefore, the eagle has been chosen as the city bird of Keelung, and the Keelung City Government has even sponsored the Keelung Ocean Eagle Carnival (基隆海洋老鷹嘉年華) in June annually for the past nine years.

Another distinct feature of this charming city is its 12 Zodiac Bridges along the Tianliao River (田寮河), which was Taiwan’s first canal built in the Qing Dynasty. These unique bridges stretch the first 2 km canal session of the 3.5 km Tianliao River starting from the Keelung Harbor. These bridges were named after the 12 Chinese zodiac animals in order: Rat, Ox, Tiger, Rabbit, Dragon, Snake, Horse, Goat, Monkey, Rooster, Dog, and Pig. It’s romantic to stroll along the two sides of the river bank to take in the unique bridges.

Standing 182 m (597 ft) above sea level in the Pacific Ocean, Keelung Islet not only is a prominent island landmark in northern Taiwan, but it is also one of the eight scenic spots of Keelung.

With graceful parabolic contour, this volcanic island is 960 m (3,149 ft) in length and 400 m (1,312 ft) in width. Along the wooden walks on the islet, visitors can appreciate the beauty of nature and various plants indigenous to Taiwan. This beautiful islet reopened in June after being closed for the past five years due to typhoon damage.