Musical Fumble and the Amazing Recovery During Tchaikovsky Finals 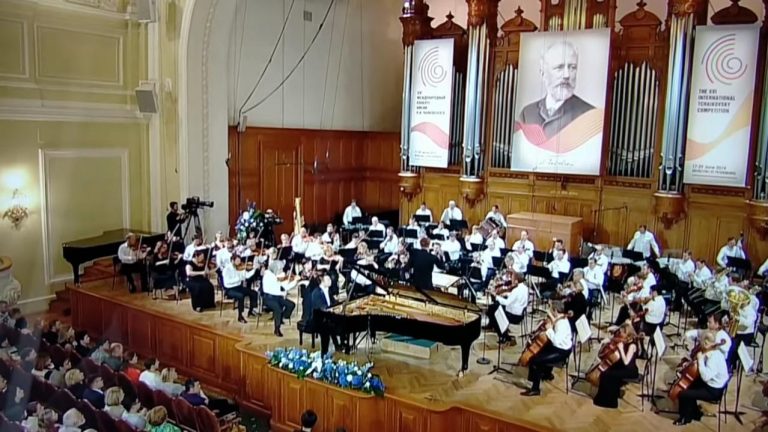 At the finals of the 16th International Tchaikovsky Competition in Moscow, a pianist from China was faced with a difficult situation when he ended up playing a concerto different from what the orchestra was playing. (Image: Screenshot / YouTube)

At the finals of the 16th International Tchaikovsky Competition in Moscow, a pianist from China was faced with a difficult situation when he ended up playing a concerto different from what the orchestra was playing. To the surprise of the audience, the pianist quickly recovered.

Twenty-year-old An Tienxiu was supposed to play Tchaikovsky’s Piano Concerto No. 1 in the finals. As the orchestra started, he enthusiastically worked on his piano. But very soon, he realized that someone had mixed up the notes, putting up Tchaikovsky’s concerto in front of Tienxiu and Rachmaninoff’s Rhapsody on a Theme of Paganini in front of every other orchestra member. Even the conductor was performing on Rachmaninoff’s notes.

Tienxiu was initially confused by the variation of notes and soon became dismayed, unable to play. After the initial shock, he successfully changed his performance to match what the orchestra was playing and ended the rhapsody in complete harmony. The chairman of the jury, Denis Matsuev, asked the Chinese pianist whether he would like to repeat his performance. But Tienxiu declined. The employee who was responsible for mixing up the notes was fired.

The mishap cost Tienxiu a potential first prize in the piano category worth US$30,000. Instead, he ended up in fourth and was awarded a diploma. Tienxiu was also given a special prize for the courage he displayed by regaining self-composure even though the notes were mixed up. First place went to Alexandre Kantorow from France.

The second spot was shared between Mao Fujita from Japan and Dmitry Shishkin from Russia. There was a 3-way tie for third place between Konstantin Yemelyanov and Alexei Melnikov from Russia and Kenneth Broberg from the United States. A total of 45 musicians from about 19 different countries were given prizes in multiple categories at the competition. The event ended with the laureates performing a concert at the Zaryadye Concert Hall in Moscow.

The competition is named after the famous Russian composer Pyotr Ilyich Tchaikovsky. Born in 1840, Tchaikovsky started taking piano lessons when he was just 5 years old. Over the course of his life, he went on to create numerous compositions that received acclaim all across the globe. In 1884, the Emperor of Russia awarded a lifetime pension in recognition of his contribution to Russian music.

Unfortunately, despite the joy Tchaikovsky created with his compositions, his personal life was not happy. He is said to have been constantly suffering from depression and was obsessively worried about getting ill. Tchaikovsky had a phobia of unbottled water. Whenever he conducted an orchestra, Tchaikovsky thought that his head was going to fall off. As such, he often held up his head with one hand during an orchestral performance, which was a weird thing to do in those times.

In 1877, Tchaikovsky married his former student. The relationship turned out to be tedious, causing several nervous breakdowns. Within a few weeks of marriage, the couple separated. Tchaikovsky had a patroness in Nadezhda von Meck, a widow of a railway baron. She supported him both emotionally and financially for 13 years. During this time, they exchanged almost 1,200 letters. However, they only met once in 1879.