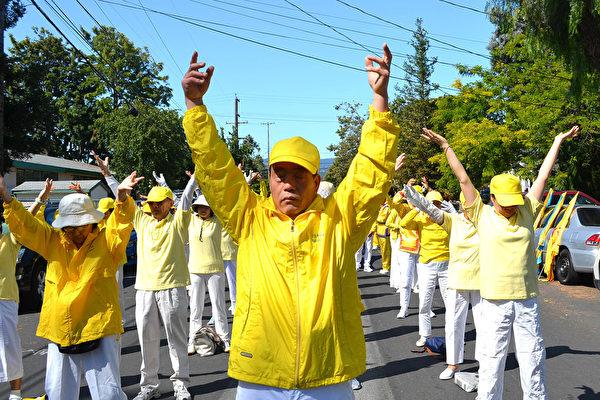 On July 4, 2019, the annual Independence Day parade was held in Redwood City in San Francisco’s Bay Area. As in previous years, local practitioners of Falun Gong, an ancient Chinese spiritual and meditation practice, were also invited to participate in the parade. Leading the Falun Dafa parade was none other than the world-renowned martial arts expert and professor Tao Zhongxian. Professor Tao is the founder of Jing Quan Dao (a type of martial arts), and champion of several martial arts competitions — China’s Martial Arts Eight Routines, Free Style Martial Arts, and Martial Arts Qigong.

Professor Tao Zhongxian, a martial arts expert, has practiced and studied Chinese martial arts in-depth, but since 1999, he found himself reaching the limitations of the so-called “highest level of martial arts,” which include various techniques such as “catch and hold,” “attack through acupoints,” “finger strikes,” and “iron cloth shirt,” so he began to look for a breakthrough beyond martial arts. He visited the Wudang Mountain to learn Taoism, joined the Shaolin Temple to study Buddhism, and searched far and wide, but still could not find what he was looking for.

It was not until September 25, 2008, and by chance, that he listened to a recording of Master Li Hongzhi’s teachings of Falun Gong (also known as Falun Dafa) on a plane. These teachings were what he had been searching for over the past nine years. Falun Gong is a practice beyond martial arts. It is a way to achieve greater spiritual heights.

Professor Tao said: “I will never forget that fateful day. After listening to three lectures, it struck me that this is exactly what I have been searching for all these years. That elation still lingers as if it happened just yesterday.”

After practicing Falun Gong, Mr. Tao Zhongxian’s physical and mental health improved significantly. More importantly, he felt that his entire being had transcended to an unprecedented spiritual height. He finally understood the reasoning behind the formation of many of the supernormal capabilities he knew about through martial arts, such as the abilities to see beyond this physical dimension, the ability to see through a wall, and levitation.

Through attending the Martial Arts Competitions held by New Tang Dynasty Television in the early years, Professor Tao had interactions with some Falun Gong practitioners. Upon further research, he found that the Falun Dafa practice is completely the opposite of the negative image portrayed by the Chinese Communist Party, which persecutes Falun Dafa in China. Practitioners of Falun Dafa are required to follow the principles of Truthfulness, Compassion, and Forbearance to become good people, and at the same time, inspire others to improve their moral values. The tenets of Falun Dafa solidified Tao Zhongxian’s determination to practice Falun Dafa.

During the parade on Independence Day, Tao Zhongxian said: “Today is the National Day of the United States. My wish is to let the world see the beauty of Falun Dafa and the greatness of Dafa practitioners. We are a group of righteous, dignified, good people trying to promote Dafa to the community”.