Inspiring Story From Cambodia: A Wish to Study in China 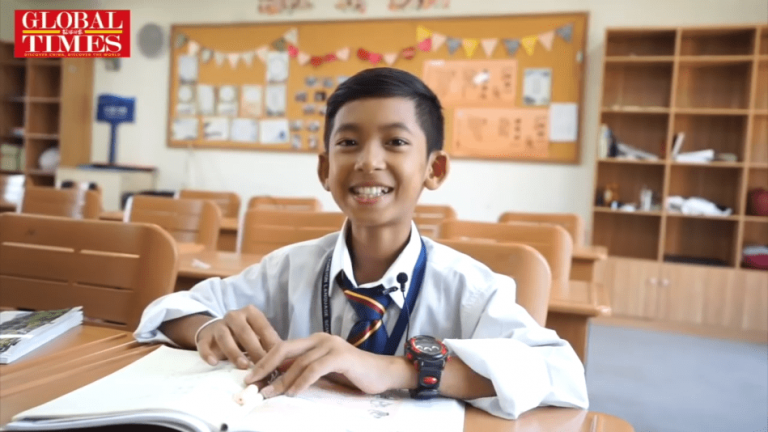 For 15-year-old Thuch Salik, having the chance to study in China is a dream come true. (Image: via Screenshot / YouTube)

There is an inspiring story about 15-year-old Thuch Salik, who was a street hawker in Cambodia dreaming of studying in China. A chance encounter with a Malaysian tourist set off a series of events that has now made Salik’s dream come true.

Inspiring story about studying in China

Salik had been working for several years in order to support his family. During this time, he picked up various languages and became quite proficient in them. He used to earn just US$15 a day, which was used to meet the basic needs of his family. Salik wanted to study in China, but knew that it was probably something that would never happen.

Last November, Salik met a Malaysian tourist while selling souvenirs at Angkor Wat. The tourist was so impressed by the boy’s mastery over multiple languages that he posted a video of Salik speaking with other people. The video went viral on the Internet, as many social media users were surprised that a young boy with little to no formal education was so good at languages.

Eventually, the video came to the attention of Cambodian businessman Khit Chhern, who decided to sponsor the boy. Soon, Salk was offered admission to Hailiang Foreign Language School in Zhejiang Province, China. “You are 14 years old and will be leaving your home to a foreign country. I hope you can work hard to be a successful and kind-hearted person. Good luck, Salik,” Chhern said in a Facebook post (News18).

Before flying off to China, Salik bowed down to Chhern at the airport, thanking the businessman for giving him a chance to break away from the cycle of poverty. The students at the school have taken a liking to Salik, even welcoming him with flowers and dance. Shorter than his classmates, Salik is studying hard to ensure that he gets into a university in Beijing.

“I like it here very much, because it is very beautiful… I like studying English and Chinese. I like the classroom, I like to eat rice, and I like my room… It’s not tiring. I like it. [In the past], I [had to] sell things when I was not in school. That was very tiring,” he said in a statement (South China Morning Post).

In terms of education, Cambodia has a very poor record. As per UNICEF, nearly 25 percent of third grade children are incapable of writing a single word in dictation tests. Just 27 percent of the 3- to 5-year-olds are estimated to be on the development track toward literacy and numeracy. By the age of 17, nearly 55 percent of children have dropped out of school.

“Inadequate learning in the early years of life, coupled with insufficient nutrition, leaves children developmentally behind. There are not enough qualified teachers, and the quality of learning environments is poor. There is a lack of basic infrastructure, such as water, sanitation, and hygiene (WASH) facilities, which particularly impacts adolescent girls and children with disabilities. Violence is a problem in schools, with teachers using corporal punishment. Children with disabilities still experience discrimination,” according to UNICEF.

The government has made primary and secondary education free. But it has not made any significant impact on the education culture of Cambodia. The education system is also plagued by bribery, with teachers asking that students pay an extra fee. Since most parents are unable to pay this informal fee, they are left with no choice but to pull their children out of school.