From Europe to China: Russia Approves the 1,250 Mile Meridian Highway 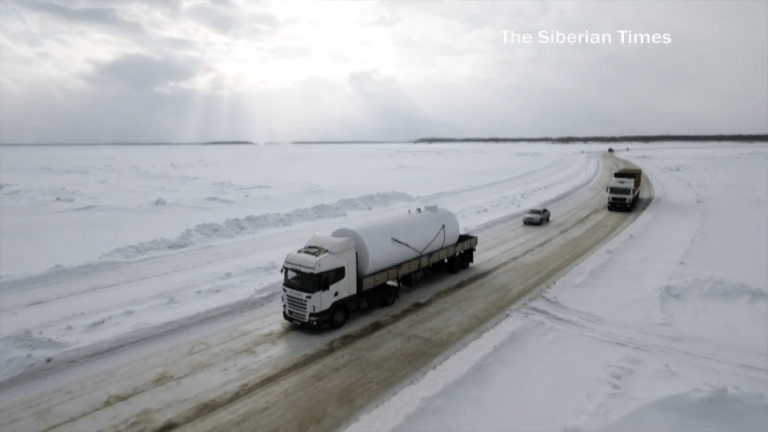 The government of Russia has officially approved the construction of a 1,250 mile tolled highway across the country that is aimed at shortening cargo routes. (Image: Screenshot / YouTube)

The Russian government has officially approved the construction of a 1,250 mile tolled highway across the country that is aimed at shortening cargo routes. Called the Meridian Highway, it will become the fastest trucking route between Europe and China once completed.

“At the western end, the four-lane highway will enter Belarus close to Smolensk, halfway between Moscow and Minsk. It will run through some deprived areas of the world’s biggest country, which have been dubbed ‘Russia’s Rust Belt’… For Western visitors traveling by car, the new road will improve access to western Russia and should provide vastly improved connections between Europe and the central Asian republics of Kazakhstan, eastern Uzbekistan, Kyrgyzstan, and Tajikistan,” according to Independent.

The developer of the project is said to have acquired around 80 percent of the land needed for constructing the highway and is currently in the process of buying the remaining 20 percent. The project will cost around US$9.5 billion and will almost entirely rely on private investor funds. However, the government has pledged assistance in attracting investment.

The Chinese government might involve themselves in the project under the Belt and Road Initiative (BRI). Taking into account the tolls that will be charged for vehicles passing through the highway, the project is calculated to break even by the 12th year after opening. Investors have asked the Russian government to guarantee minimal revenue of US$550 million, protecting it from political risks like state border closures.

In April, President Putin attended China’s BRI Forum and indicated that Russia is completely willing to cooperate with China on the project. “It is a sign of just how little bargaining leverage he has that he has to make such a plea in public and lump Russia together with all the rest as supplicants… Implicitly he is also trying to induce China to invest in the Arctic and other major infrastructure and transportation projects in Asia,” Stephen Blank, a senior fellow at the American Foreign Policy Council, said in a statement (VOA News).

Meanwhile, China’s trade war with the U.S., which currently is under a ceasefire, has had a negative effect on the BRI. Lenders are apparently scared of the economic fallout from the conflict, with many pulling away from funding infrastructure projects for fear of massive losses. Bankers are also concerned about the diminishing credit quality of Chinese companies involved in the BRI.

“We’re considering rejecting funding for some Belt and Road projects after analyzing the potential impact the trade war might have on the sponsor… We remain supportive of projects which are not exposed to these risks, especially in some countries that could even benefit from the trade war, in particular, Vietnam, and other South-East Asian countries,” a senior Beijing-based banker said to Reuters.

Even though both countries have agreed on a trade truce, the arrangement is just temporary. If the Trump administration feels that Beijing is still indulging in unfair trade practices and is a threat to the country’s companies and security, experts believe that more sanctions and restrictions will be put on China. The communist-led country is already seeing an exodus of manufacturers who do not want to expose themselves to the risk of the trade conflict.

Major companies like Apple, HP, Dell, Sony, Nintendo, etc., are reportedly planning to move a significant portion of manufacturing to other countries. Over time, this mass departure of companies will be a big blow to China as they aim to become a global high-tech manufacturing hub and will eventually impact their BRI.