Funny Trends & Funnier Laws: Chinese Men Forced to Give Up on ‘Beijing Bikini’ 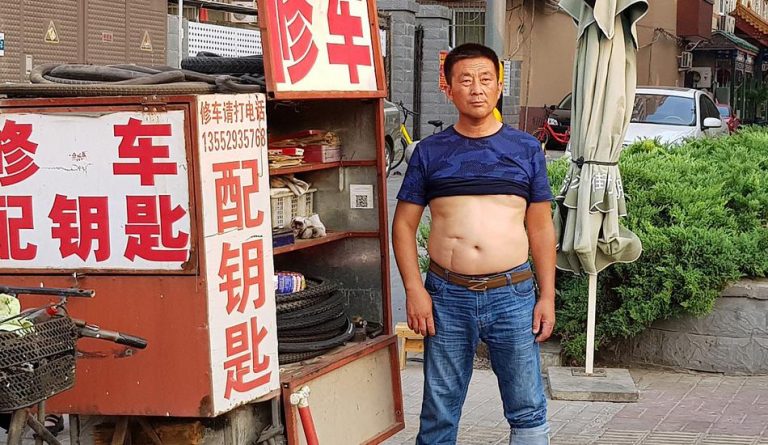 In certain regions of China, it is traditional for men to pull up their shirts and expose their midriff in summer to get relief from the heat. (Image: Anagoria via wikimedia CC BY 3.0)

In certain regions of China, it is traditional for men to pull up their shirts and expose their midriff in summer to get relief from the heat. Known as the “Beijing Bikini,” the practice has come under intense criticism in recent times for being “uncivilized.”

No more shirts up

The tradition of exposing the midriff comes from a Chinese medical belief that says doing so helps to move the warm “chi” energy out from the internal organs. As such, it used to be normal to see men with their shirts up during summertime while sitting in parks or just walking on the streets. In the city of Jinan, which lies between Shanghai and Beijing, authorities have outlawed the practice. A public notice has been issued warning citizens that men caught with the “Beijing Bikini” may be punished and even fined.

“But Jinan authorities aim to rectify such ‘uncivilized behavior’, according to the notice, which added that citizens had complained about the ‘uncivilized phenomenon’ which damaged the image of the city. Authorities said they planned to crack down on ‘improper dressing in public places,’ which included ‘shirtlessness’ and ‘wanton exposure of body parts.’ Public bickering, jumping queues, littering, and ‘uncivilized dog walking’ are also being targeted under the notice, which is aimed at enhancing the image of the city,” according to CNN.

In Tianjin, men who pull up their shirts are being fined nearly US$30. The city of Shenyang has also implemented similar clothing restrictions. The new government rules have found support among a number of citizens who feel that exposing the midriff in public is shameful and that the practice must be ended. However, many who are against the policy argue that it unnecessarily interferes in the privacy of the people.

“The supervision in private areas reflects arrogance and idleness of power… Do not kidnap laws with moral matters, after all, China has not set up a moral court similar to Iran’s,” a Weibo user said (ABC News). Most men who don a Beijing Bikini in summer, particularly older ones, laugh at the new law and feel that the state is making a mountain out of a molehill. The men say that the practice is the only way they can get relief from the heat.

There is also debate about the gender discrimination inherent in the law. Women have always worn clothing that shows their midriff and continue to do so. Some feel that targeting men for such an act is gender biased and amounts to body shaming. “If women reveal their belly it’s beautiful, but when we do it, it’s ugly?” one of the men asked in dismay (The Washington Post).

Temperatures in China have been heating up over the past few weeks. Officials in Hebei Province issued a red alert, warning citizens that a heatwave could push the region’s temperature up to 40°C (104°F). China has a 4-tier weather warning system, denoted by colors like red, orange, blue, and yellow. The city of Xingtai saw more people walking in sun-protective clothing as the heat rose to 39°C (102.2°F).

In the city of Handan, measurement of pavement surfaces showed a shocking temperature of 60°C (140°F). In Beijing, temperatures of up to 42.9°C (109°F) were recorded in the first week of July. The heat has forced people to use more electricity to power their air conditioners. As a result, several cities have been seeing record-high power consumption in recent times.