A Trembling Merkel Has Everyone Concerned 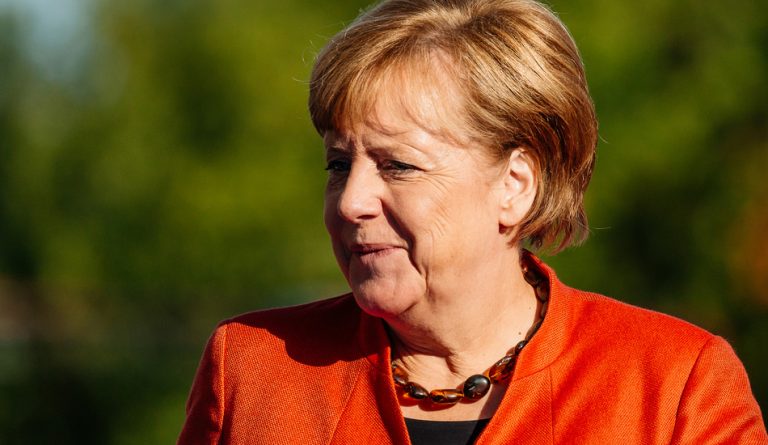 Merkel's trembling has made everyone worry about her health. (Image: via flickr)

German Chancellor Angela Merkel has been making headlines the past few weeks for all the wrong reasons. The 64-year-old has publicly trembled in a most violent fashion on two different occasions. While the incidents have led to questions whether Merkel is healthy enough to continue in her current post, some have asked that she be shown compassion.

The first trembling incident took place in Berlin a couple of weeks ago when Merkel was standing alongside Ukrainian President Volodymyr Zelensky. Her whole body violently shook and the video became viral on the Internet. The incident was blamed on dehydration. A week later, Merkel again trembled uncomfortably at a ceremony in Berlin and was seen crossing her arms in a bid to stop the shaking. Her team announced that Merkel’s trembling was caused due to her fears of repeating it a second time.

Ever since these events, German media has been abuzz with speculation that the Chancellor is not fit enough to carry out her duties. Many outlets sympathized with her, abstaining from unnecessarily glossing over the topic. This possibly has to do with Germany’s history with state surveillance under Nazi and communist regimes in the past century. It has left a deep scar in the society and journalists often see unrestrained reporting of a politician’s health as an invasion of privacy. This is also due to the fact that there is a video circulating online showing Hitler shaking in a similar way.

Some of Merkel’s colleagues came out in her support and asked the media not to sensationalize her health problems. “I had a lot of feeling that she was in bad shape… now it’s 40°C in Germany, and things can happen… it’s a private thing, it shouldn’t be part of headlines… In my experience this is tabloids. This question of privacy is taken more into account in Germany traditionally,” Elmar Brok, CDU politician, said to the BBC.

A few politicians tried to score some brownie points from the issue. Annalena Baerbock, leader of the German Greens, a pro-environment party, stated that Merkel’s shaking was caused due to the heatwave triggered by climate change.

However, she soon came under intense criticism on social media. As a consequence, Baerbock issued a public apology. “This statement was a mistake. I have apologized to the Chancellor for this. I have recklessly established a connection that does not exist,” she said in a statement (Evening Standard).

International spy agencies are apparently very interested in Merkel’s unusual trembling. Though media has linked her condition to stress, dehydration, overwork, and so on, intelligence groups think otherwise. German media has been reporting that a Western intelligence agency believed that the bouts of shaking were caused due to a neurological problem. Some of the agencies are also trying to access Merkel’s medical records. At present, the records are sealed off in a high-secure military facility. Hitler’s shaking was reportedly due to Parkinson’s.

The interest of intelligence agencies in Merkel’s health is understandable considering that she is one of Europe’s most powerful leaders. Any sudden medical complications that might disable Merkel from work could throw international projects into turmoil, especially if they involve Europe since a new German leader would have to be elected. Merkel is due to step down from the post of Chancellor in 2021 when her term ends and has announced that she will be quitting politics. Merkel has been serving as the leader of Germany since 2005 and will be 65 years old on July 17.